LEGO Master Builder: 9 of the Coolest Things Created With LEGO

Go outside the LEGO box and check out some of the coolest things people have created with LEGO.

There is something utterly magical about LEGO. The versatile mini blocks of creation are timeless and perfect for any age group, sparking the imaginations of people around the world.

There is even a good chance that you someone you know got an awesome lego set this past holiday season.

From its humble beginning in 1934 in Billund, Denmark, the LEGO company has grown to one of the largest corporations around the world. 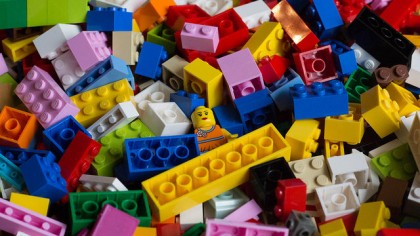 The LEGO company has inspired fans of the company to play and create; to use their colorful brick to “break their own rules” and create their own LEGO creations. You have probably come across some of these projects while surfing the net.

Creating a fully functional object out of LEGO is far more common than you think. You have probably made your fair share of small LEGO cars and kits.

Steve Sammartino and Raul Oaida decided to think outside the LEGO box and create a fully functioning LEGO car.

Built almost entirely out of LEGO this car can run entirely on compressed air, powering the cars 256 pistons.

You will not be winning any races with the vehicle but the LEGO car can travel an impressive 20 kph or 18.6 mph. Would you take a ride?

There have been countless teams across the world eager to snatch the prestigious builder title of "the tallest LEGO tower." If you want to take the title you are going to have to beat the impressive Italian LEGO group's 35 meters LEGO tower.

Created in 2015, the LEGO Tower Babel was a massive project that garnered the attention of LEGO builders across the world.

Eventually, the record was surpassed by a tower created in the imaginative German theme park Legoland, only beating the previous record by approximately half a meter.

Who knows? Maybe in the future, someone will create a LEGO tower that reaches into the atmosphere.

Maybe you have always wanted to get in on the 3D printer hype. Rather than go out and buy one, Arthur Sacek decided to build one from scratch.

The fully functioning LEGO printer has the ability to print almost any type of model out of a block of foam with relative ease. These justs show that a little creativity can go a long way with just a few LEGO bricks.

It is also good to mention that countless people have also created awesome LEGO 3D printers each with their own printing abilities and techniques, even creating printers that can create mini designs with LEGO.

This one is perfect for those who fawned over the Star Wars X wing as a kid.

42 times larger than the commercial X-wing model you can buy out of the box, the project took the team 4 months to make, weighing at about 45,000 pounds.

The thrills, excitement, and physics that makes a roller coaster a cultural staple has been shrunken and brought down to scale in this LEGO model.

Created by Adam Tucker, the LEGO coaster has all the features of some of your favorite real-world rides. Who knows, maybe in the future, you will be able to ride a life-sized LEGO coaster.

Sticking to the trend of cars, here is another amazing vehicle created by the LEGO team themselves.

If you ever wanted to get behind the wheel of the hypercar, the Bugatti Chiron, why don’t you just build one with some LEGOS?

This LEGO Bugatti Chiron is a 1:1 drivable car created by LEGO Technic. Taking the team 13,000 man hours and 16 specialists to create the vehicle, the LEGO Bugatti Chiron has 2,304 LEGO Power Functions motors, 4,032 Lego Technic gear wheels, and 2,016 LEGO Technic Cross axles. The vehicle itself ways 1,500 kg and has a theoretical performance of 5.3 HP.

Legos are extremely durable so why not build a house with them? Top Gear’s James May wanted to do just that.

The massive LEGO home doesn’t just look cool but is easy to live in. The project was completed in conjunction with other enthusiasts from the Lego community.

If you are planning to take on a large hoard of zombies in the near future, and only have some LEGOs lying around, you may be in luck. With a group LEGO bricks, Jack Streat created the perfect adult toy, an HK UMP 45 submachine gun.

The gun itself launches bricks instead of bullets. Yet, anyone who has played with LEGO bricks will tell you that the bricks are nothing to take lightly.

Legos can be used for more than just engineering feats. Many people around the world use LEGOs to create magnificent and thought-provoking pieces of art.

One of the best to do it is the talented Nathan Sawaya. The award-winning artist has created awe-inspiring works with LEGOs, building sculptures that offer lighthearted perspectives of life.

His work has caught the attention of people across the world and has had the fortunate opportunity to speak at Google Zeitgeist, TEDx, Yahoo! and at the Clinton Library.

If you could build anything, what would you build with LEGOs? Leave your ideas in the comment below.

Master the Science of Memory, Leadership and Focus with This Bundle