Four NASA pioneers will be immortalized as LEGO pieces, including larger sets explaining the significance of their work.

Some of NASA's most important figures are being made into LEGO pieces hitting shelves soon. The company's new "Women of NASA" series includes Sally Ride, Mae Jemison, Nancy Grace Roman and Margaret Hamilton. The fan-proposed and fan-supported idea includes these pioneering individuals in miniature form with setting associated with their successes.

The entire set is recommended for ages 10 and older, and it will include a total of 231 pieces. LEGO says the set will retail for $24.99 USD.

"Great for role playing space exploration missions," Lego said in a press release announcing the set on Wednesday, Oct. 18. "Explore the professions of some of the groundbreaking women in science, technology, engineering and mathematics (STEM) with the Lego Ideas Women of NASA set."

Building an Idea into a Reality

The figurines are the brainwork of Maia Weinstock through LEGO Ideas program. Through the program, Weinstock submitted her idea to the site. Then, she had to get 10,000 users' approvals before the LEGO company would review the idea. Once reviewed, the company would then suggest adjustments and finalize the LEGO pitch to go into production.

Weinstock described why she felt these women needed to be recognized by the public:

"Women have played critical roles throughout the history of the U.S. space program, a.k.a. NASA or the National Aeronautics and Space Administration. Yet in many cases, their contributions are unknown or under-appreciated — especially as women have historically struggled to gain acceptance in the fields of science, technology, engineering, and mathematics (STEM)," she wrote in her proposal.

The Women of NASA Includes:

In 1992, Mae Jemison became the first African American woman to fly in space. She logged nearly eight days on the Endeavour space shuttle. She served as an astronaut from 1987 to 1993. Jemison is both a physician and engineer, in addition to being a linguist and passionate student of the humanities. Jemison now leads the 100 Year Starship project. 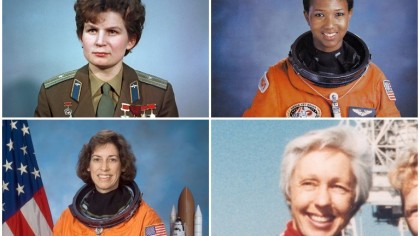 Like Jemison, Sally Ride was also an astronaut. Ride became the first American woman to fly in space in 1983. She put in two weeks orbiting Earth through two separate shuttle missions. She also served as a physicist. Today, she advocates for girls entering the STEM fields and for better science education. Both Jemison and Ride are featured in appropriate flight outfits they used for their specific launches. Their minifigures also come with a 4 inch (12 centimeter) model of their respective shuttles.

Margaret Hamilton worked as a software engineer at MIT when NASA reached out to her and her team to make software for the Apollo mission. Hamilton's programming skills helped put Neil Armstrong and Buzz Aldrin on the moon safely in 1969. Her minifigure is paired with the iconic photo of her standing next to the Apollo Guidance Computer code.

Nancy Gracy Roman joined the NASA team as an astronomer in 1959. She developed NASA's reputation as a global leader in astronomy. Roman is known as the "Mother of Hubble," and rightly so. To commemorate her legacy with the Hubble Space Telescope, LEGO placed Roman with a small Hubble figure and an image of a planetary space nebula.

Weinstock's original submission did include mathematician Katherine Johnson. Johnson, a researcher who worked as a human 'calculator' during the early Mercury and Apollo eras, was featured in the film Hidden Figures. Unfortunately, Johnson is not featured in the final set. A company representative noted that LEGO couldn't get approval from her for an undisclosed reason, and thus, they moved forward without Johnson's figure.