The future of laptops is here. Lenovo showed off their vision of futuristic laptops at an event in New York this week. The likely never to be actually made design features a fully flexible screen and a built-in keyboard. The design relies on being told what to do via voice commands or the use of an additional stylus. Not many details were given on how the company would attempt to build the notebook, stating the design would be achieved through “advanced materials” and “new screen technologies.” Not the most specific of tech speak.

The Consumer Electronics show is an annual tech get-together held every year in Las Vegas. Generally, the wildest ideas get revealed here and there have been some flexible displays launched here in the past. But nothing that comes close to the Lenovo concept which would be a personal computer with insane portability. Interestingly the laptop has a retro sort of feel to it with the included use of the classic ThinkPad red keyboard mouse tool.

Flexible screens have come and gone in prototypes before but we are yet to see a fully functional consumer product come to the market. Royole have developed an ultra-thin AMOLED flexible display. It has an overall thickness of just 0.01 mm (10 µm). While the technology seems to be there, the applications of it have not followed through. The Royole website suggests a list of applications including, smartphones, fashion design and within the automotive industry. Though we haven’t seen much movement from the big players in the department, when questioned why about the delay in the development of flexible screens, Dr Liu from Royole explained: “There are a lot of things going on with a flexible display. There are many different materials – semiconductors, conductors, insulators, barriers, substrates – that you have to combine into a very thin film. If you change a single material you probably have to change many others to make everything compatible.” 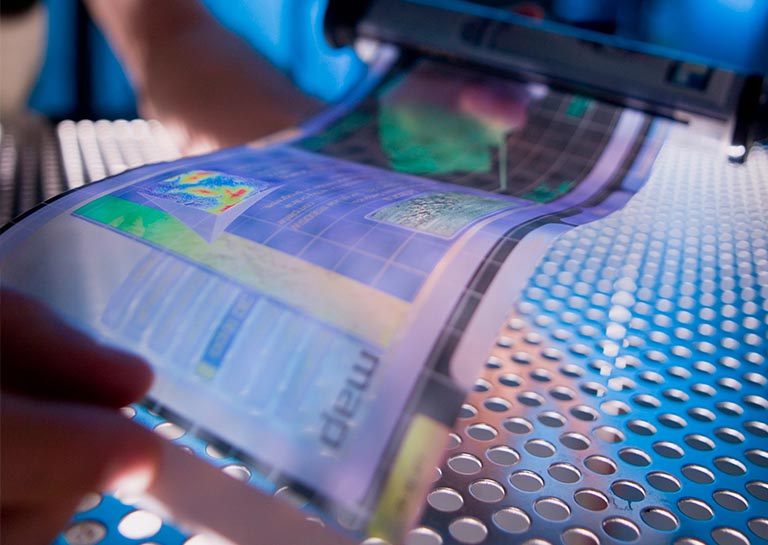 This isn’t the first time Lenovo has shown prototypes of flexible displays. Last year at its Tech World Conference in San Francisco the firm showed off a crazy bendable smartphone. The prototype had a flexible display and internal hardware that allowed it to be turned into a wearable device by wrapping around your wrist. Reminiscent of a high-end snap band, the Chinese company has gone quiet on this tantalizing idea.

Samsung has suggested their flexible technologies would be released 2019 and Apple are definitely in the race. Last year Apple won the patent for "flexible display devices" which means the tech giant must have something serious up their sleeves. Rumors are all over the internet about the possibility of flexible iMac displays that would allow an immersive work environment. Although Apple has been very quiet on the subject.