A recent registration to the World Intellectual Property Organisation suggests the iconic handset is back.

The long-awaited folding Lenovo’s Motorola RAZR with a foldable screen might be on its ways back. 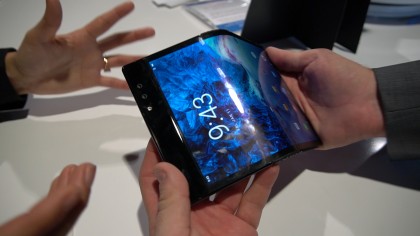 A registration the World Intellectual Property Organisation (WIPP) appears to show a device with a folding screen in the inside as well as a smaller screen on the outside.

Last month the Wall Street Journal reported it that Motorola was set to relaunch the iconic RAZR with a foldable screen.

The submission to the WIPP doesn’t actually name the phone as the new RAZR but the illustrations look an awful lot like the original handset. Obviously, the biggest change is a long foldable screen on the inside, rather than the screen/button combination of yesteryear.

Iconic handsets get a makeover

Rumors have persisted that the phone was going to get a smartphone makeover after the classic phones such as the Nokia 3310 and Nokia 8810 got a re-release.

The RAZR V3’s co-designer Paul Pierce told CNET last month that he thought there was an “opportunity” to resurrect the old phone, but that “it can’t be done just for a gimmick or something of that nature. We’ve got to figure out how to deliver a breakthrough.”

Folded screens seem to have become possible, Samsung is expected to launch a foldable smartphone next month alongside its non-foldable Galaxy S10 series.

Foldable and flexible screens made a big impact at CES and the world's first commercially available folding foldable phone + tablet with a fully flexible display, Royole FlexPai, was launched onto the market.

If the technology is as good as it seems, the RAZR could be launched looking very similar to its original design.

“I think people are kind of yearning for and remembering back to that Razr -- when it flipped open, and the sound of that, the feel of that. Where is that today? And it seems like an opportunity,” Pierce recently explained, “So we’re trying to understand what we can do to revive some of that but it’s got to be done in a way that fundamentally delivers on an incredible experience.”

Foldable screens have been under development for some time and will surely become mainstream within a few years. Interestingly the first fully functional product to use the technology isn’t coming from a smartphone manufacturer but rather a tech developer.

Skyhooks Might Just Make Rockets a Thing of the Past