Lexus has finally entered the EV market unveiling a luxury crossover concept called the LF-1 Limitless that could be powered by an all-electric powertrain.

Lexus has unveiled a new crossover concept that can support an all-electric powertrain at the Detroit Auto Show this week. 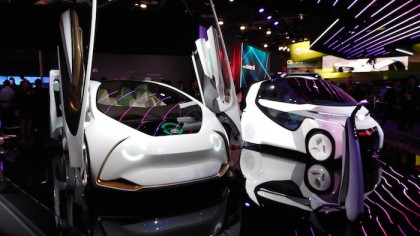 The carmaker has lagged behind in the electric vehicle market due to its ownership by Toyota who until recently had a strong focus on hydrogen cell fuelled cars.

Now Lexus has the go-ahead from its mother company to develop an all-electric vehicle that could make it a major player in the luxury EV market. Toyota has promised that by around 2025 all Toyota and Lexus models will be available as either a dedicated electrified model or have an electrified option. The first of these new electric vehicles should start hitting showroom floors by 2020.

The Lexus concept car, called LF-1 Limitless has been shaped by a visual design concept described as "molten katana”. The car's physical designers were inspired by the organic shapes of liquid metal in combination with the sharp edges of a traditional Japanese sword.

Lexus says the car ‘could be powered by fuel cell, hybrid, plug-in hybrid, gasoline, or even all-electric.’ “This is our vision for a new kind of flagship vehicle that embraces crossover capability without giving up the performance and luxury delivered by today’s top sedans,” said Kevin Hunter, president, CALTY Design Research. “The LF-1 Limitless concept incorporates imaginative technology while creating a strong emotional connection by improving the human experience for the driver and passengers.”

The car was a rare release at the Detroit Auto Show this year which featured a large number of gas-powered pickup trucks and large SUVs. While there are many crossover vehicles hitting the market, the new Lexus does manage to visually stand out from the crowd with its dramatic curves. Lexus describes the car as more sportscar than wagon and the exaggerated dash-to-axle ratio gives the car a particular kinetic energy.

Luxury crossover cars have been seen from almost every automotive manufacturer out there, so while Lexus isn’t leading the race this new vehicle is a strong contender to dominate the market given Lexus' history with the very popular RX300.

Unveiling the #LexusLF1Limitless at #NAIAS. In 360°.

“There’s no doubt that luxury crossovers are an increasingly popular choice for luxury customers,” said Lexus General Manager Jeff Bracken. “This LF-1 Limitless concept illustrates what could happen if Lexus were to add a flagship crossover to our line-up. It’s a gorgeous execution and we’re anxious to see our customers’ and dealers’ response.” The LF-1 Limitless is still a concept vehicle and it isn't expected to roll out of the factory anytime soon.

Toyota unveiled their future electric plans late last year. Some of their key goals include having sales of more than 5.5 million electrified vehicles, including more than 1 million zero-emission vehicles (BEVs, FCEVs) by 2030. They have no plans to develop new vehicles without an electrified option. They will expand the production of Battery Electric Vehicles (BEVs) and roll out these vehicles in 2020 starting in China before heading into other markets that include, Japan, India the US and Europe.