LG takes the trend of bendable displays to another level altogether!

The Consumer Electronics Show (CES) has always been an ostentatious affair and this year is no different. The CES 2019 recently revealed the latest innovation by LG in the form of a roll-up television screen that is a sight for sore eyes.

Ever since then, bendable displays or foldable displays have only risen in their popularity. From innovating bendable smartphones to now designing a bendable TV screen, we have come a long way up the technological climb.

Just when the attendees at the CES 2019 being held at Las Vegas, Nevada thought they had seen it all, they were brought face to face with the majestic ostentatiousness of the LG Roll-Up TV Screen at the extravaganza. This LG Signature Television is an ultra-high definition TV which also folds itself and rolls out of its base stand.

It also functions as a sophisticated and smooth sound bar. One of the most impressive features of this Roll-Up Television Screen is that its 165 cm screen can completely fold itself and disappear into the base panel.

In addition to that, the screen can rise entirely for a full viewing experience, partly to display photos as well as function as a control screen to operate smart devices.

Opinions on This New Technology

David VanderWaal, the Senior Vice President of the marketing division of LG, introduced the all-new OLED TV saying, “What science fiction directors imagined decades ago is now a reality. It brings freedom of design to space, without the limitations of a wall.”

In the same vein, Avi Greengart, the Research Director of GlobalData expressed his views on the Roll-Up Television stating, “It looks very cool, and interior designers are going to love it. This is a unique technology; you are going to want this.” 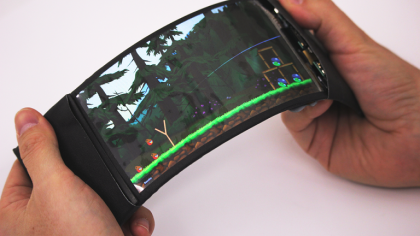 Although LG did not divulge the cost of this OLED Roll-Up Television, the first look definitely has the onlookers enthralled and the competitors thinking about ways in which they can outdo this imposing specimen of a bendable television screen.

Greengart also predicted that foldable phones are going to do well this year and will give rise to another popular trend with new products and versions in the market.

In any case, the LG 8K OLED Television reveals some exciting new features and takes the folding device green technology a step further.

A German Company Just Deliberately Blew Up Its Own Rocket