A modern marvel of engineering and design, the Lego Technic Bugatti Chiron took over 13,000 man hours to construct.

Lego blocks, when they first hit the market decades ago, offered children ways to express their creativity for hours on end, and no doubt planted the seed in the minds of many young learners who went on to become future engineers. 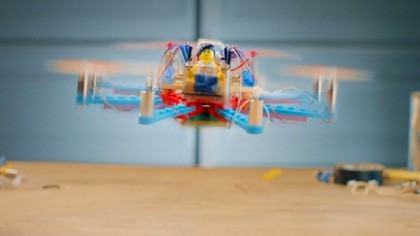 You Can Now Build Your Own Drone Out of LEGO Pieces

In recent years, however, Lego has far exceeded the expectations of the original founders of the company.

Backed by a healthy spirit of competition, the company has produced countless impressive creations that seem to defy logic, from a range of full-size structures to small works that inspire innovation in other industries.

The most impressive recent example is a full-scale Lego Technic Bugatti Chiron. Although to be fair, the car was constructed using the more enhanced LEGO Technic, a product which has been around since 1977 and which the company markets as parts that combine to produce "advanced realistic models, full of gears, pneumatics and motors".

The work behind the project

With this project, the goal was to not only create a life-sized car, but also integrate the company's Power Functions motor technology into the design. The company set the bar very high, and the team delivered.

Pulling off the stunt required a total of 13,438 man hours, 1,000,000 LEGO Technic parts, and the final weigh-in for the structure was a whopping 1,500 kg. What also sets the car apart is that no glue was used in its construction.

--> It boasts an estimated torque of 92 Nm and 5.3 HP theoretical performance.

--> It features a functional real spoiler and speedometer, all made from various Lego Technic elements.

A Lego innovation is born

“This life-size model is a first of its kind in so many ways and with it, we wanted to push the boundaries of our own imagination. Our Technic designers and the engineers from the Kladno factory in the Czech Republic, the place which also builds the impressive models for LEGO Stores and LEGOLAND parks, have done an amazing job both at recreating the Chiron’s iconic shapes and making it possible to drive this model. It’s a fascinating example of the LEGO Technic building system in action and its potential for creative reinvention," said Lena Dixen, Senior Vice President of Product and Marketing at the LEGO Group.

The loudest praise came from Andy Wallace, however, a former race car driver who tested the LEGO Technic Chiron on the road:

"When I first saw the LEGO Chiron, I was immediately impressed by the accuracy of the model and the minute attention to detail. In fact, from about 20 meters away it’s not obvious that you are looking at a LEGO car. I can only imagine how much time and effort went into making this model."

A scaled down version that offers the same excitement

A 1:8 scale of the car, containing about 3,600 pieces made its initial debut at Lego stores on June 1st of this year.