Modern science has once again seemed to turn science fiction into a reality. A medical research team from Tsinghua University in Beijing have released information about the promising use of liquid metal to form a bridge between the two ends of a severed nerve, resembling something out of the 1991 sci-fi movie 'Terminator 2'.

When a nerve is severed, the muscle at the end of the nerve becomes disconnected from the brain and thus cannot be moved; this leads to atrophy where the muscle wastes away from not being used. In order to prevent this, a method is needed to bridge the gap between the cut ends of the nerve to sustain functionality whilst the nerve heals and repairs itself. Doctors typically use something known as Ringer's solution, a solution of salts that mimics body fluids, to bridge the gap.

Nerves heal at a slow rate, about 1 mm per day, meaning that some cases can take years to re-knit and heal. Whilst Ringer's solution does work, there is still risk of muscle degradation due to the slow healing process and the solution is not as conductive as the nerve used to be.

Jing Liu at Tsinghua University along with other researchers say they’ve reconnected severed nerves using liquid metal for the first time and that it dramatically outperforms Ringer's solution.

MIT Technology Review reports, "Biomedical engineers have been eyeing the liquid metal alloy gallium-indium-selenium for some time (67 percent Ga, 20.5 percent In and 12.5 percent Se by volume). This material is liquid at body temperature and is thought to be entirely benign. Consequently, they have been studying various ways of using it inside the body, such as for imaging." 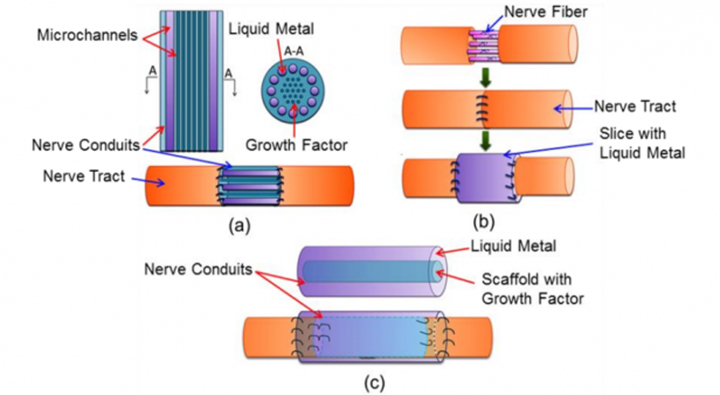 Jing and the team applied a pulse to nerves connected to the leg of a bullfrog and measured the signal that reached the calf muscle, which was responsible for its contraction. They then cut the nerves and put the severed ends into the ends of a tube filled with either liquid metal or Ringer's solution. Results showed that the signals that passed through the Ringer's solution were severely weakened whereas the signals passing through the liquid metal stayed consistently powerful.

"Ringer's Solution could not be competitive with the liquid metal in the performance as functional recovery channel," reads the summary of the research, which cites "favorable fluidity, super compliance, and high electrical conductivity" among the advantages.

Once the nerve has fully healed, the liquid metal that shows up in x-rays can be easily removed with a microsyringe.

The potential is great and its benefits are obviously worth further investigation but many questions remain unanswered. Will the liquid metal prevent nerve regeneration? How much muscle function can be preserved via this method?  How well would a human body accept a metal intruder? Recent success with metal plates being used to protect skulls however may offer a leading light on that last question.

Inspired by Nature but as Tough as Iron: What Is Metal Foam Used For?