Liquid nitrogen is all the rage nowadays for fun science experiments and seeing what happens when you super freeze things. As the supercold liquid warms up, it turns back into nitrogen gas, thus expanding. Using that principle, Grant Thompson from Youtube decided to fill giant 6-foot balloons with the rather expensive liquid and see what would happen.

The only issue that arises from filling balloons with liquid nitrogen is the -320˚F liquid will turn the flexible rubber of the balloon into brittle rigid sheets. This means that the giant balloons become really easy to pop and thus explode prematurely. Getting the giant balloons to completely inflate turned out to be a hard task, but Grant eventually got it done after setting the balloon on a trampoline.

When the giant balloon explodes, the remaining liquid nitrogen gets aerosolized and almost instantaneously turns into a gas. This is because the increased surface area reacting with the warmer air. One of the cool things about the cold liquid is that as long as you touch it quickly, it won't do any damage to your skin. This is due to the Leiden frost effect forming a small gaseous barrier on your skin to keep you safe. If you were to let the liquid pool on you for any period of time, your skin would start sustaining irreversible damage. 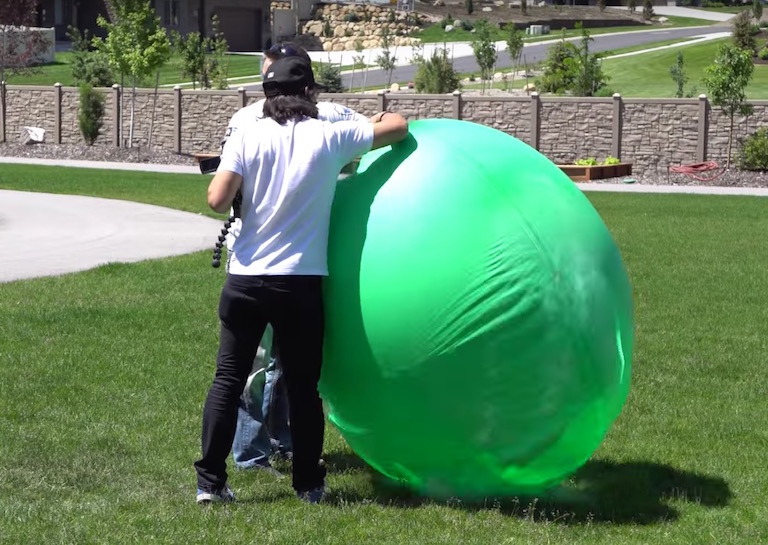 Not that we are recommending it, but liquid nitrogen is not a regulated substance, meaning you can likely go purchase some at a local store. The stuff isn't cheap either and the container to hold the liquid is even more expensive. So, you will probably just want to leave the super cold liquid nitrogen science to the professionals or. . . Youtubers.