On the planet, there exist many places with conditions so harsh no man-made structure can withstand unruly forces. Before the construction of any building, the environmental conditions in which it is built must be closely investigated. Today, skyscrapers extend far above the Sahara desert, cities exist on man-made islands, humans have found a way to conquer every continent on the planet. However, in some regions around the globe, there exist a few places with conditions so harsh that no modern engineering technique can be used to overcome the vast forces of mother nature. Although, despite the shortcomings of modern intervention, some communities are employing ancient techniques to construct bridges in the most improbable of locations- in the wettest regions on Earth like Meghalaya.

Meghalaya- The wettest place on Earth

India’s northeast, in the state of Meghalaya, extends an incredible range of lush green mountains with dense tropical forests. The land is carved by thousands of rivers that flow through the water saturated valleys.

Every year, the rains bring in plentiful life to the region. Along with it comes a slew of challenges. With some regions exceeding well over 12,000 mm of annual rainfall, the area is no stranger to water. In fact, it is the wettest place on Earth. Modern civilizations tend not to venture far into the forests of Meghalaya. However, the indigenous Khasi people call the dense rain-soaked jungle their home.

For eight months of the year, gentle rivers carve away the mountains and landscapes in Meghalaya. Though during the monsoon season from June to September, the once calm, gentle rivers turn into ferocious white waters that thrash away anything that stands before the immense rapids. Where most of the world faces a water crisis, Meghalaya spouts a new problem- a problem with too much water. 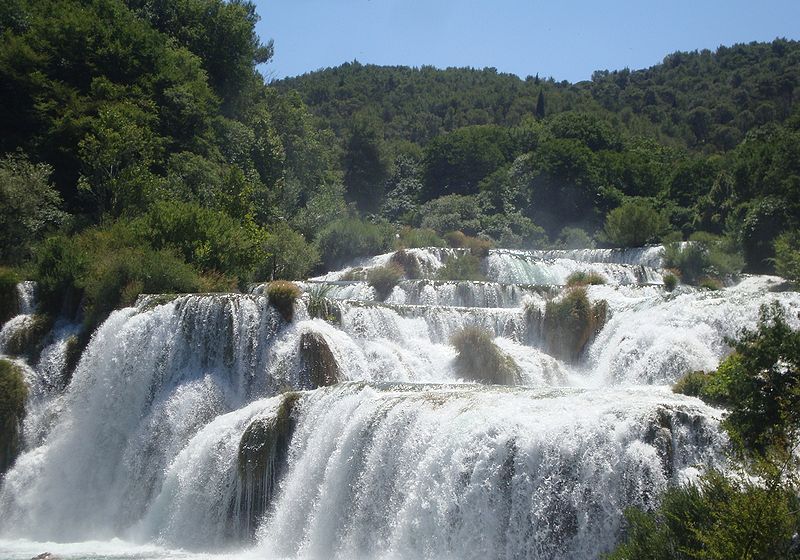 Outside the town, walls are a thick network of trails that cut through the countryside. Built far before the consideration of cars, the roads are best traveled by foot. The challenging trails make the transportation of materials a treachours journey as the small winding trails weave through the thick jungle.

For hundreds of years, the Khasi people have been utilizing the natural resources in the area to develop and maintain their trails that are vital to their way of life. For centuries, the tribe would build bamboo bridges to span across the extensive network of rivers. Although, every year the heavy monsoons would feed the raging rivers, causing extensive damage to the bridges. The structures would rot and would be carried away by the current, leaving the villagers stranded.

Going back to the roots

For many years, the torrential downpours have plagued Meghalaya with broken bridges. However, nearly 200 years ago, the Khasi elders devised an ingenious solution to their watery problem.

From the most unlikely of places arose an ingenious solution. As the rivers constantly change shape, undercutting trees along the river banks, some of the trees were left with exposed roots along the river's edge. The phenomena would prove to become a unique solution.

Over many decades, the Khasi elders patiently guided the roots of the Rubber tree to span across the streams. After years of carefully tending to and nurturing, the Rubber tree roots finally reached the other side, forming the skeleton of the bridge. Over many more years, the roots continuously grew enough to support the weight of a human. Centuries on, the tribes continuously shape and mend the unique bridges across the land. 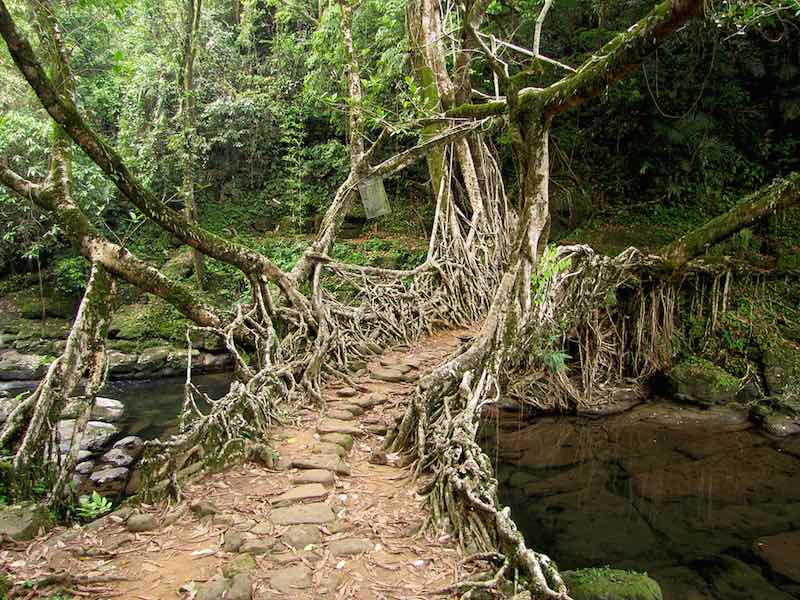 The terrain of the region is rugged; steep cliffs and rapid rivers create magnificent waterfalls which originate high in the mountains. Without the bridges, many of the villages throughout Meghalaya would be inaccessible. Fortunately, the Indian Banyan - otherwise known as the Rubber tree - grows in abundance along cliff faces and river banks. Its roots and branches extend from the trunk to drink from the water below. With some clever engineering by the War Khasi people, the roots can be formed into the bridges that are so unique to the region.

The building technique is phasing out

Inevitably, one of the major drawbacks of the root bridges is the immense amount of time it takes to "build" one. It takes approximately 15 to 20 years for the roots of the tree to grow into a strong web of tangled roots that form to become the skeleton of the bridge. Although. despite the construction time drawbacks, the bridges feature a few unique advantages.

The bridges rarely require major maintenance and over time, they consistently gain strength. Unfortunately, the tradition of building the bridges is phasing out in favor of alternative methods. Now, builders use steel rope and other modern construction techniques to connect Meghalaya's remote regions. The bridges take years less to construct, but they lack a certain beauty the live root bridges maintain. Fortunately, the bridges are still around and are still in use.

Still in use to this day

Despite modern advances, many people who live in the Meghalaya jungle still make use of the lively bridges. Though the bridges today are a popular tourist attraction, the natural wonders continuously allow safe passage to the civilians of the area.

To this day, students of the RCLP School in Nonorphan Village, Meghalaya, India, constantly cross the bridges to reach their school. Now, the destination has become a popular tourist area. For those willing to make the arduous journey through the thicket of the jungle, the bridges await them on the other side.

Over time, the living root bridges have become much stronger. The bridges now feature beautiful handrails carefully molded from the roots of the trees. Some of the bridges are reinforced with rock slates to provide extra footing for people and provide extra material for the roots to latch on to.

The roots continuously grow,  forever shaping the live root bridges. In one particular area, the locals have made an addition to an already existing bridge. Now, a second magnificent bridge spans above the original. 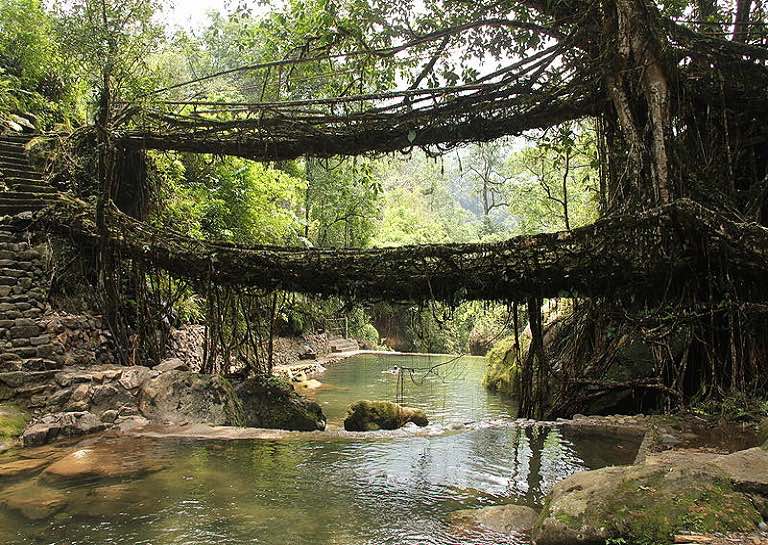 The double-decker bridge is an engineering marvel and an architectural spectacle. In a place once plagued by heavy downpour that damaged all routes of passage now lives a network of live bridges. They are not only magnificent in beauty, but also practical in their ability to withstand the immense force of the river, yet able to prevent rot. Moreover, the bridges are constantly healing.

The bridges offer a glimpse into the past and also into humans' natural ability to derive solutions from unlikely places. The living root bridges of Meghalaya are absolutely incredible. Modern engineering offers some incredible solutions to unique problems, but sometimes taking it back to the roots of nature can offer the best passage of success.