London's Crossrail is a step closer this week after the completion of the permanent track, keeping the project on time for the first trains to run in December 2018.

The Elizabeth Line, Europe’s largest infrastructure project, has taken a step closer to completion this week with the installation of the permanent track. The £14.8/$19.8 billion project is currently on time and on budget, expected to start entering service in December 2018. The new train line travels through 42km of tunnels under central London connecting the east and west of the city directly for the first time.

The project promises to connect an addition 1.5 million people to central London within 45 minutes, including a direct connection from Heathrow Airport to the heart of the banking district and Canary Wharf for the first time. 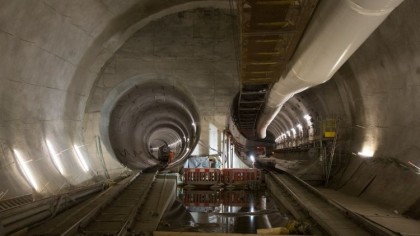 The construction of the tunnels was started in 2012 by eight 1,000 tonne tunnel boring machines (TBM’s) working 24 hours day. At a depth of nearly 40 meters, the TBM’s each 7.1m or 23.3 ft in diameter (2.8m or 9.3ft larger than those being used by Elon Musk and his 'Boring Company' to tunnel under Los Angeles) could not travel in straight lines due to the already crowded space. To ensure the TBM’s were able to avoid known obstacles in the hidden world of existing tube lines, underground rivers and utility tunnels, each machine was fitted with a laser guidance system to keep it on course.

During the course of the excavation the eight boring machines, each 150m long - 14 times longer than a London double-decker bus, removed approx. 3.4 million tonnes of earth, equivalent to the weight of 34 US Nimitz class aircraft carriers. Shifts of 20 engineers operated each TMB 24 hours a day every day of the year to keep the project on track.

Once complete a fleet of 66 new trains built in the UK by Bombardier in Derby will transport passengers along the new line in a level of comfort not seen before on the London tube network. Each 200m train consists of 9 fully integrated walk-through carriages enabled with climate controlled air-conditioning, Wi-Fi and 4G.

Each train comes with regenerative breaking technology which is normally found on hybrid and electric vehicles like the Toyota Prius or Tesla Model S. This technology allows each train to use 30% less energy.

In addition to the rail tunnels, 14km of platforms, ventilation tunnels, escape tunnels and passenger walkways have been created under London’s streets for the ten new world-class stations. These spaces, which are smaller than those of the rail tunnels created by the boring machines, were been excavated by a number of other methods and then spray lined to seal the tunnels.