Lost Artemis temple has finally been found. The location of the temple has confused researchers since the 19th century thanks to the misreading of an ancient text.

Archaeologists have discovered the ancient temple dedicated to the goddess Artemis after a century of searching.

It was found in the fishing village of Amarynthos on the second largest Greek island Euboea, by archaeologists with the Swiss Archaeological School in Greece alongside the Ephorate of Euboea Antiquities. Evacuation of the site has been underway for years.

The team, led by Prof. Karl Reber of the University of Lausanne, Director of the Swiss Archaeological School in Greece, and Amalia Karappalalidou, Honorary Ephorate of Antiquities of Evia, were able to identify the temple as belonging to Artemis due to sealed inscriptions.

These were found on bases of foundations, coins, and tiles that were inscribed with the word, “Artemis.” Another clue was the frequent references to Leto, Artemis’ mother and Apollo, her brother.

There is no structurally sound temple standing, rather remains of buildings that made up the temple of Artemis entirely. The structures that have been uncovered originate from between the 6th and 2nd century BC and are joined by underground foundations, including the remnants of monuments and an underground fountain. 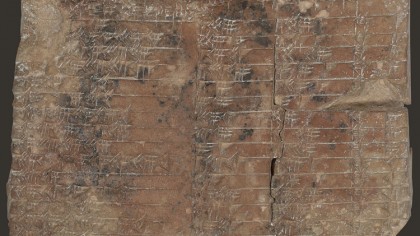 This Ancient Babylonian Tablet Proves the Greeks Did Not Invent Trigonometry

The reason it took as long as it did to find the temple was due to a misread of an ancient document, meaning they’d been digging in the wrong place.

Based on the faulty reading of the text, researchers assumed the temple was about a mile from the coastal city of Eretria.

This was due to a Greek-Swiss team digging in 1964. They discovered stones from buildings of the time had been reused in a Byzantine church. A researcher suggested that based on this find, the directions to the temple had likely been miscalculated and steered the team even further away from the actual site.

It wasn’t until 2007 that the Swiss School of Archaeology on Euboea discovered that temple grounds were actually located 7 miles away from the original excavation. They began excavation in 2012 and only now has the temple been revealed and confirmed in all its glory.

The existence of the temple was first mentioned in the 10th book of Roman geographer and philosopher Strabo, who lived in first century AD Asia Minor during the transitional period of the Roman Republic into the Empire.

"According to ancient sources, this sanctuary was one of the most important of Evia. Since the 19th century, archaeologists have tried to locate this sanctuary, but this has not been possible, despite many assumptions, because of the erroneous indication of distance in Strabo's text," said the Greek Culture Ministry in a statement.

Artemis was known as the goddess of the hunt, chastity, childbirth and was one of the more revered goddesses in the pantheon. She was the daughter of Zeus and Leto and was born on the island of Ortygia or Delos. She is often referred to as the protector of nature and the hunt, protecting both wild and tame animals as well as agriculture and animal herding.

Her most well-known attributes included a bow and arrow, a quiver, a pair of hunting spears or even a water jug.