Fluctuations in weather could lead to a drought of everyone’s favorite draughts, international research suggests.

Your favorite pilsner or ale could be at risk thanks to massive swings related to climate change. There are hundreds if not thousands of reasons to care about climate change and rising yearly average temperatures. A new study links severe droughts and heat with the success of a massive industry and popular global beverage.

Beer is the most popular alcoholic drink in the world by volume, and success of its sales and production influence supply and demand for other beverages as well. Research from the University of East Anglia (UEA) predicts extreme heat limiting global barley yields, reducing the amount available to make beer. This shortage could see a “dramatic” fall in beer drinking and sharp rise in beer prices.

The UEA researchers noted beer consumes 17 percent of the world’s barley production. Over 83 percent of that barley comes from Brazil. However, average yield losses across the world range from 3 to 17 percent depending on how severely affected an area is by climate swings.

Lead author Dabo Guan works as a professor of climate change economics at UEA’s School of International Development. Guan explained why beer hasn’t been on too many people’s radars.

“Increasingly research has begun to project the impacts of climate change on world food production, focusing on staple crops such as wheat, maize, soybean, and rice,” he noted. “However, if adaptation efforts prioritize necessities, climate change may undermine the availability, stability and access to ‘luxury’ goods to a greater extent than staple foods. People’s diet security is equally important to food security in many aspects of society.”

“Although some attention has been paid to the potential impacts of climate change on luxury crops such as wine and coffee, the impacts on beer have not been carefully evaluated. A sufficient beer supply may help with the stability of entertainment and communication in society.”

Using the most recent available data, the UEA team estimated global beer drinking will drop by 16 percent (almost 29 billion liters) if current climate events keep happening. For reference, 29 billion liters is equivalent to the amount of beers consumed by the United States alone each year.

That drop in availability heightens demand, and with a higher demand comes higher prices. The UEA team calculated a 15 percent price spike globally. Those price spikes will hit countries like China that consume the highest volumes of beer. China is expected to fall some 4.34 billion liters. In the UK, the researchers predict beer consumption could fall between 0.37 billion liters and 1.33 billion liters. The price is expected to more than double as a result.

Is there hope for beer drinkers?

Should citizens only invest interest in climate change to save a Bud Light? That answer is far and away no, the UEA team said. However, beer -- and the crops that sustain it and other industries -- should be taken as a sign of much larger issues at play.

“While the effects on beer may seem modest in comparison to many of the other -- some life-threatening -- impacts of climate change, there is nonetheless something fundamental in the cross-cultural appreciation of beer,” Guan noted. 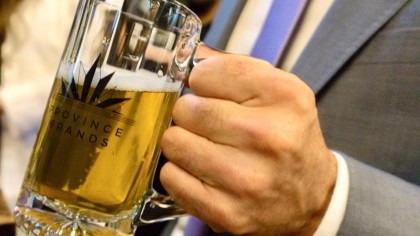 So what’s a beer fan to do? The researchers recommend getting used to drinking less of it to reduce demand and save your wallet. But the bigger issue of climate change still remains. While the average individual won’t be able to single-handedly solve the climate change crisis, they can vote for leaders and support research that addresses climate change, emissions, and acknowledging the issues surrounding climate swings.

"We're not writing this piece to encourage people to drink more today than they would tomorrow," Guan told Business Insider. "What we're saying is that ... if people still want to have a pint of beer while they watch football, we have to do something about climate change."

Via: University of East Anglia