A cheap and effective skin cancer alternative has been invented, and provided the team is able to secure government support in the future, it will represent a big step in the global fight against rising melanoma rates.

A hand-held device that could prove highly effective in skin cancer diagnosis has been developed by a team consisting of four engineering graduates from McMaster University in Canada. Best of all, it’s a true win-win for everyone: the device is modestly priced, yet it’s invention has racked up international accolades and a hefty cash prize of $40,000. 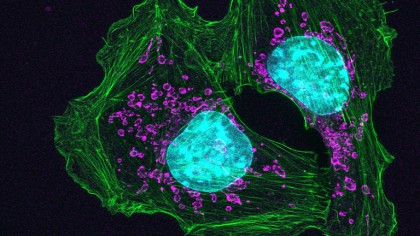 In addition to the money, which will go towards continued research and development (R&D) efforts for sKan, the name of their invention, the four also received the prestigious James Dyson award. sKan was only one of two projects from the country to make the shortlist of the final 20, with entries coming from 23 countries. It’s essentially a gadget that can be used to quickly and accurately spot melanoma by measuring the temperature of the skin.

Prateek Mathur, one of the co-creators, discusses the research approach the four took in creating a cancer detection device that was innovative, yet cost-effective: “We came across the issue of skin cancer and how technology hasn't had the same impact on its diagnosis as it has on other fields in medicine,” he said, adding, “We found research that used the thermal properties of cancerous skin tissue as a means of detecting melanoma. However, this was done using expensive lab equipment. We set out to apply the research and invent a way of performing the same assessment using a more cost-effective solution.”

The invention is the culmination of their final year project begun in the Electrical and Biomedical Engineering program, the idea being to provide an alternative to traditional cancer-detection methods such as costly and invasive biopsies or the less-reliable method of examining the skin for abnormal areas. It works by using heat sensitive resistors known as thermistors to create a thermal map on the area of the skin a physician has chosen for examination. The digital reading that is generated then clearly indicates the presence—or absene—of melanoma.

Though the team is deeply honored by the appreciation for their invention, they are quick to remind everyone that the most important outcome from this has been the “huge global potential” of their invention, said co-creator Michael Takla. “Winning the James Dyson award means the world to us. The prize money will help us to continue developing a medical device that can saves people’s lives. We are truly humbled to be given this remarkable opportunity”.

Award founder and noted inventor Sir James Dyson offered enthusiastic support in recognizing the enormous impact of the invention: “By using widely available and inexpensive components, the sKan allows for melanoma skin cancer detection to be readily accessible to the many...[i]t’s a very clever device with the potential to save lives around the world.”

At present, the team is planning to ramp up R&D in hopes to attaining regulatory approval from the influential Food and Drug Administration US government agency, which would offer them a greater opportunity to disseminate the product globally.