A startup from Cambridge University is developing a robust heart rate monitor that can provide information to doctors in real time.

A startup company from Cambridge University has developed a low-cost heart rate monitor that uses AI to detect heart irregularities in real time.

Cambridge Heartwear, wants its wireless device to be used to help detect dangerous heart rhythms and irregular beats in patients at risk of stroke in a bid to reduce the stroke-related mortality and morbidity rates. Strokes affect more than 120,000 people in the UK each year.

The founders of the company, Professor Roberto Cipolla from Cambridge’s Department of Engineering and cardiologist and clinical academic Dr. Rameen Shakur met in 2015, a year after Roberto’s father had died of a stroke.

They began collaborating and their ongoing work resulted in the formation of Cambridge Heartwear and the creation of their first wearable device.

The wireless monitor, called Heartsense, incorporates multiple lead ECG, oxygen sensing, temperature, and a tracking device. It is easy and comfortable to wear for early screening patients. The electronics are housed in a waterproof casing.

Heartsense is more sensitive than other monitors currently available. The device collects data that it then sends wirelessly in real time to a cloud where adaptive AI algorithms can analyze and identify relevant irregular and dangerous rhythms in the same way a physician would with a stethoscope.

The device's inventors say the monitor isn’t intended to replace cardiologists but to give them diagnostic support in real time. According to the National Health Service (NHS), more than one million people across the UK are affected by a heart rhythm disturbance known as atrial fibrillation (AF),. Strokes that are primarily caused by an irregular heartbeat are deadly.

More than 80% of people who either die or are left with severe neurological deficits following a stroke had an irregular heartbeat as the underlying cause. Strokes are the fourth biggest killer in the UK, with more than a reported 100,000 instances each year. Recovery from the neurological damage is costly.

Diagnosis comes too late for many patients

It is estimated the NHS spends more than £2.5 billion annually on neurological treatment and rehabilitation for stroke patients. 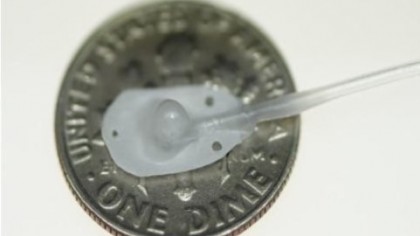 “It makes sense to pick up AF before someone has a stroke and put preventative treatment in place,” said Shakur, who was formerly a Wellcome Trust Clinical Fellow at Cambridge and is now based at MIT. “Unfortunately, the technology and clinical care systems we currently have in place aren’t really doing this.”

Currently, early diagnosis of irregular heartbeat requires patients to use a Holter monitor. This is a cumbersome device that measures heart rate via 12 leads attached to a patient's chest that need to stay on for 24 hours.

It can take as long as six weeks from the first GP appointment to the result of the Holter device to be analysed and an irregular heartbeat to be detected. In comparison, the Heartsense monitor could start providing data to a cardiologist immediately.

The device is now in clinical trials and development will continue into 2019.

Scientists Used Soda Bread as a Scaffold for Tissue Engineering