Lufthansa is offering its guests the favorite meals of German astronaut Alexander Gerst.

"Passengers will have the chance to enjoy one of the menus that Alexander Gerst and his crew will also be receiving on board [the station] as special highlights, chicken ragout with mushrooms," Lufthansa announced in a recent press release. Gerst will spend the next six months on the ISS and Lufthansa guests will feel a little more like an astronaut thanks to the space inspired menu offered on long-haul flights.

Passengers can indulge in a replica of Gerst’s on board ‘bonus meal'. Bonus meals are given to astronauts to help them overcome homesickness and as a special reward.

The dishes are specially designed to create feelings of nostalgia and warmth. Gert’s bonus meal is created from traditional recipes from his home region of Swabia in southwestern Germany.

The meal may include famous delicacies such as cheese spaetzle with bacon and chicken ragout with mushrooms. Guests won’t eat exactly what Gerst does though. 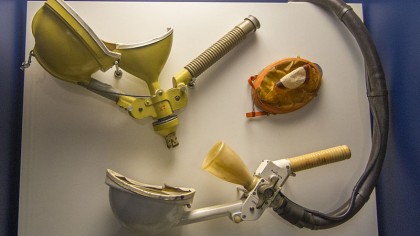 The astronaut will have a low-sodium version of his favorite food that has been canned and sent to space, the cans can last for up to two years. Passengers on Lufthansa flights will tuck into version os of the dish created by the company's catering department.

Lufthansa urges its customers to forget any ideas about bland tasteless space food. "Anyone who dreamed of becoming an astronaut as a child probably didn't give much thought to the food," the company wrote.

"And the food on the first outer space missions wasn't really anything worth dreaming about: it's gone down in history as 'tubes and cubes.'" Its menu description goes on to say that the dishes served onboard are ‘worlds apart’ from old-fashioned space food.

Space food come a long day from pastes and cubes

The business class dining card is also illustrated with images from the ISS to get its diners in the mood. Lufthansa isn’t wrong when they claim space food has improved a lot since the first manned missions.

These days ISS astronauts are even enjoying pizza. Astronaut Randy Bresnik told Food and Wine magazine: “The best food we had was a treat we got sent up as a care package, which was a pizza making kit with the crust and sauce," he said.

"Because the texture and the taste was so different than the regular [freeze-dried] food we had, it was the best pizza I ever had." Creating food for astronauts is a combination of looking at nutrition, shelf life and taste.

Of course, astronauts are limited by the way they can prepare foods and its essential they are getting the exact amount of calories, vitamin and minerals in each meal. The clever food scientists responsible for designing NASA's menus have managed to include delicious sounding items like Indian fish curry, crab cakes, lemon curd cake, and even apricot cobbler.