Robotics and automation technologies have been used to create a wide variety of complex machines, and one artist has created a machine that sorts rocks into lines and it's pretty mesmerizing. Sorting rocks isn't completely useless, as geologists often need to sort and classify different rock fragments into different categories. Designed by Czech artist Prokop Bartoníček and German artist Benjamin Maus, this machine uses a suction cup and a camera to identify rocks and move them into the correct category. This machine was created for display at Ex Post, an installation space in Prague. Check out the video below to see the robot in action.

The entire process of sorting these stones takes the robot two or three days, but it can accomplish the tasks much faster and more accurately than human counterparts. The camera on the mount locates a certain pebble, then the built-in algorithms determine the age and color of the rock, according to Popular Science. After interpreting this data, the robot selects the correct placement for each rock, and they are lined up in perfect columns and categories.

This robot art installation comes as automation and robotics are being brought into the creative spaces more and more. Recently, robot painters won US$30,000 in an art competition, and their work was indistinguishable to their human counterparts. This project does serve a practical purpose, however, as it is being used to research automation in modern day geology. Named Jller, the robot is functioning well, and the creators had this to say:

"Jller is part of an ongoing research project in the fields of industrial automation and historical geology. It is an apparatus, that sorts pebbles from a specific river by their geologic age. The stones were taken from the stream bed of the German river Jller, shortly before it merges with the Danube, close to the city of Ulm. The machine and its performance is the first manifestation of this research." 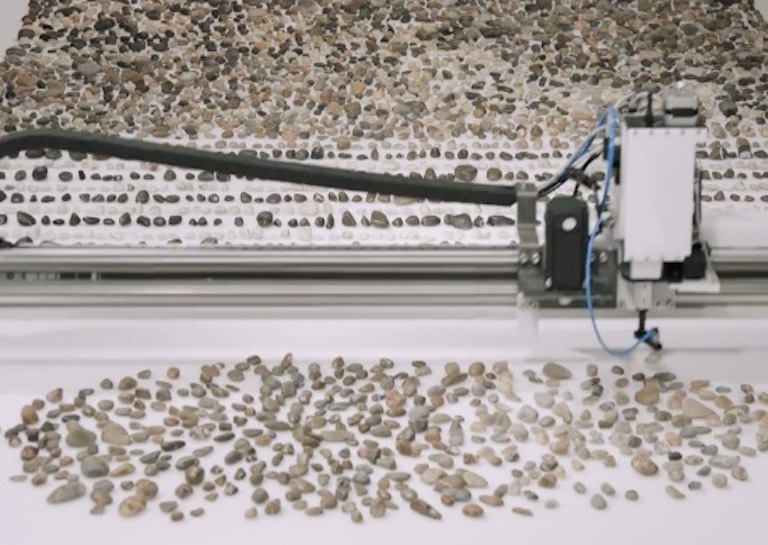 Modern sciences can use automation to conduct research and discoveries at a new alarming rate. Instead of having to investigate archaeological sites slowly with many people, automation may soon allow one robot to uncover history much faster. The algorithms for Jller were written by researchers, and they continue to build upon its sorting techniques.