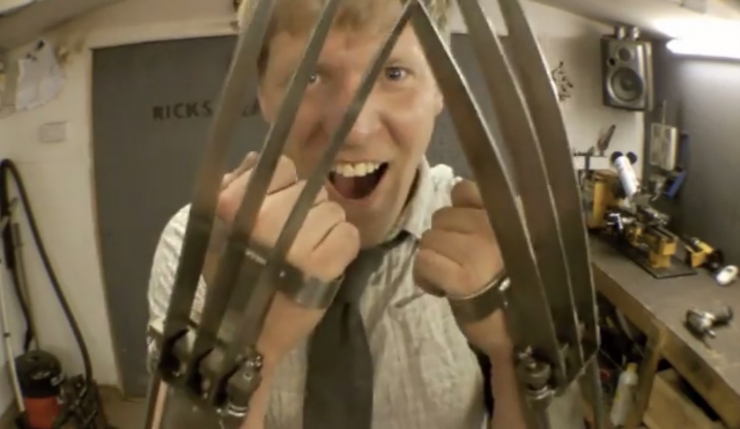 Popular Youtuber, mad inventor and British plumber Colin Furze has just released videos of his latest project - fully functioning Wolverine claws. He shows them off in a video where he laughs maniacally whilst slicing and dicing his way through everyday objects (and even a blow up version of X-Men villain Mystique). He has literally just fulfilled the wishes of so many young boys (and probably just as many adults too).

In the films and comics Wolverine has claws the pop-out from between his knuckles. But of course our mad inventor friend Furze hasn't gone that far by implanting the claws however, they can automatically deploy and also retract. They have a small profile, sitting on the wrists without being too bulky. The user does however have to wear a pneumatic assembly in a backpack to allow for the automation.

The plumber by day and inventor by night designed and manufactured the claws in his garage. He made them from stainless steel and set about with a few goals including the most obvious one, for them to well resemble Wolverines claws. He also wanted a smooth deploying and retracting system and after ruling out an air ram, cable system and a motor and toothed track system, he finally set on using a pneumatic assembly. He also wanted the blades to spread out as the weere deployed rather than remain parallel, to best replicate Wolverine.

Check out the manufacturing video below:

After some time and dedication he's managed to create a pretty good homage to Wolverine and damn do I want me some claws.
Advertisement
Follow Us on

50 Movies Every Scientist and Engineer Should Watch