Cheese production might be 4,000 years older than previously thought, according to new archaeological findings.

Cheese -- the dairy product responsible for so much delicious happiness for millions of people -- might be thousands of years older than anyone ever thought. New archaeological findings indicate that fermented dairy products like soft cheeses and yogurts now date back nearly 7,200 years ago.

The discovery was made by an international team of researchers led by Penn State.

"This pushes back cheese-making by 4,000 years," said Sarah B. McClure, associate professor of anthropology.

Milk, cheese, and the pottery to make fermented products

The discovery was made in Croatia along the Dalmatian Coast. Researchers spotted traces of fatty residues in pottery they analyzed. Those fatty remnants on the ancient pottery indicated that soft cheese and yogurts go back as early as 7,200 years ago in that area.

The presence of milk in pottery in that same area was seen as early as 7,700 years ago, the researchers noted. DNA analysis of the populations also uncovered that adults were largely lactose-intolerant. Their children, however, could easily consume milk up until around the age of ten.

The shift wasn't necessarily driven by genes, however. The team indicated milk was an acceptable and safer alternative to water.

"First, we have milking around, and it was probably geared for kids because it is a good source of hydration and is relatively pathogen-free," said McClure. "It wouldn't be a surprise for people to give children milk from another mammal."

Roughly 500 years later, there came fermented milk products. With that rise of fermented milks into cheese and yogurts came a need to have pottery specifically designed for that purpose.

"Cheese production is important enough that people are making new types of kitchenware," said McClure. "We are seeing that cultural shift."

The earliest pottery used for food preparation in the Early Neolithic period was called Impressed Ware. That style of pottery was used for meats, fish, and some milks, according to the results of the team's testing.

Roughly 500 years later, in the Middle Neolithic era, another style of pottery begins to take shape. Danilo Pottery included plats and bowls, and can be divided into three subsets.

Then there is Rhyta pottery. The vessels are footed with round bodies and incorporate human-like or animal-like features into the design. They're very distinctive in look. The researchers noted four rhyta in their survey sample showed evidence of cheese. 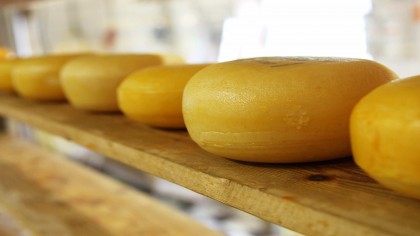 The last type of Danilo cookware is one much more common to anyone who has ever attempted to make cheese on their own. The people of the Dalmatian Coast had sieves -- used to strain the fermented milk and separate the curds from the whey. Three of the four sieves in the archaeological sample showed processing into cheese or other dairy products.

Cheese fans now have a new recorded date of how long their favorite gooey food has been in existence. The Croatian find marks the earliest documented discovery of cheese not only in the Mediterranean but in the whole world.