Over the last 50 years or so our homes have increasingly been stuffed with all manner of updated technological gadgets and appliances, ranging from smartphones and tablets through to Hi-Fi systems, gaming consoles and computers and laptops as well as smarter models of everyday appliances such as ovens, dishwashers, washing machines and dryers. The energy implications of this wave of technological advancement could have been severe, were it not for the whole host of efficiency and performance standards implemented by governments and industry, aimed at making these devices more energy efficient, and therefore also less costly.

Most people don’t tend to think too much about this, but with the escalating challenges of climate change, it is something that we will all have to consider in depth. Here is a basic introduction.

It costs 27 pence ($0.41) per year to charge an iPhone 5. However, global smartphone sales reached 567 million units in 2012 and smartphone ownership will reach 1 billion by 2016. The global annual electricity usage of the iPhone 5’s sold within a course of a year is equivalent to the annual electricity consumption of 54,000 US households (roughly equivalent to the size of Cedar Rapids, the second largest city in Iowa). This is just the electricity consumption. Consider also that smartphones are generating a huge expansion in internet usage, which is predicted to grow by 17 times, relative to 2010 levels, by 2016. Smartphones are therefore adding to the already substantial pressure inflicted on internet data centers. What can be done about this?

The good news is that smartphones are displacing heavier and more energy intensive technology, including televisions, computers and gaming consoles. For example, Facebook users are increasingly viewing the social media site via their smartphones, rather than their desktop or laptop PCs. Viewing of premium internet content since 2011 has increased on tablets and smartphones and decreased on PCs and Macs.

Smartphones and tablets also use far less energy than PCs and Macs, as you would expect. More than 80 percent of the energy consumption associated with a smartphone is generated by operating the network. Increasingly energy efficient technology has meant that the Global System for Mobile Communications (GSM) produces about 25 kilograms of carbon dioxide (CO2) per subscriber annually, which is equivalent to driving a car on the motorway for about an hour. This means that mobile communications are actually driving down overall energy consumption and that means going mobile is a great way to reduce energy consumption.

There is a slight hitch of course (there usually is) and the hitch is this: IT and communications still generate about 2 percent of global carbon emissions (more than 830 million tons of carbon dioxide per year), according to a report from the Centre for Energy Efficient Telecommunications (CEET) in 2013. This is about the same as the airline industry. Whoops!

Thankfully, the mobile industry is actively trying to do something about this. The GSM Association (GSMA) Green Power for Mobile programme has already helped the industry to deploy renewable energy technology, such as solar, wind or biofuel, to off-grid base stations in developing countries and the industry is also looking more generally at other potential ways to reduce energy, such as replacing air conditioning by fans or passive air flows. Network optimization upgrades can reduce energy consumption by 44 percent while solar-powered base stations could potentially reduce carbon emissions by 80 percent. Improved planning and optimization of mobile broadband can also help to save energy. The GSMA also offers operators its Mobile Energy Efficiency benchmarking service, which helps them to identify cost cutting and carbon emission reduction opportunities in their networks.

In 2014, two scientists at The Massachusetts Institute of Technology (MIT), Professors Joel Dawson and David Perreault, developed hardware to cut energy use from mobile devices through a company they formed called Eta Devices. The device acts like an electronic gearbox by switching to various power configurations in order to reduce energy. According to the company’s CEO, Mattias Astrom, Eta Devices can improve the efficiency of power amplifiers in mobile communications handsets and base station towers by up to 70 percent.

Another group, a consortium called GreenTouch formed by mobile operators, equipment providers and research institutions in 2010, is working on the development of a whole suite of technical specifications and proof of concepts that it hopes the industry will adopt. The consortium is essentially attempting to rethink every aspect of the mobile computing sector. In 2013 it released a report that found communications networks could potentially reduce their energy use by 90 percent. It has also developed a Large Scale Antenna System which uses hundreds of thousands of antennas to beam radio signals together, thereby improving energy efficiency and reducing transmitted radio power. The system was demonstrated twice in Switzerland by Swisscom, a GreenTouch founder member, in November 2011.

GreenTouch believes that using smaller towers in cities to send signals over shorter distances could also reduce energy, particularly if they could go into a ‘sleep mode’ during periods of reduced network traffic. 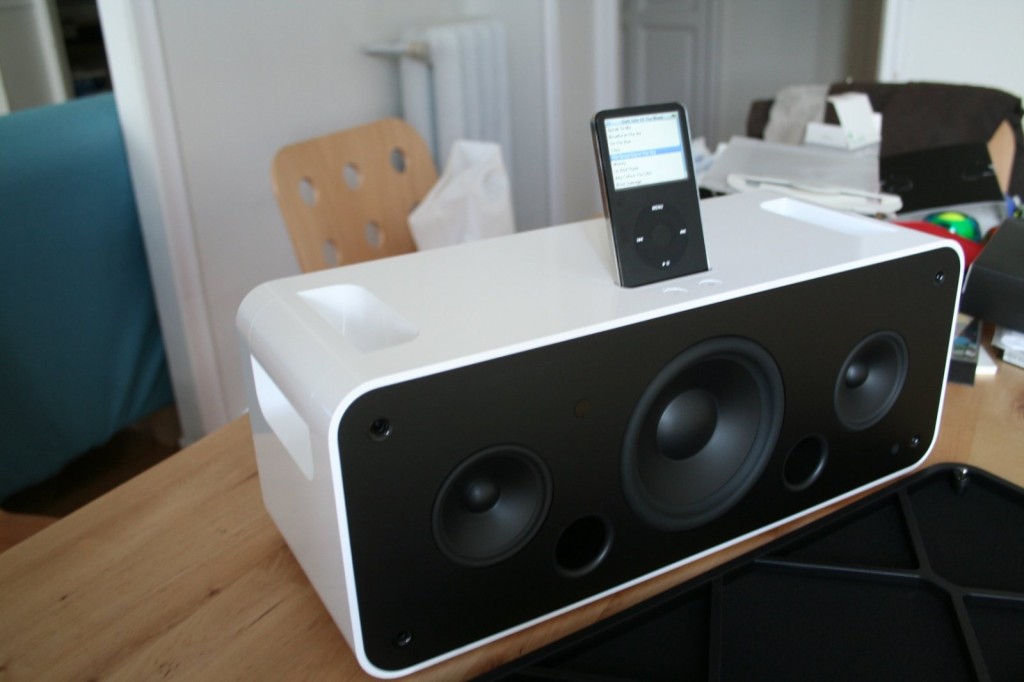 In 2009 Bose developed an energy efficient sound system for the 2011 model Chevy Volt hybrid electric car. The company used a proprietary design to make its system 30 percent smaller, 40 percent lighter and requiring 50 percent less energy than conventional Bose sound systems while continuing to deliver high-quality audio. The company’s engineers focused on switching amplifiers, high force motor speakers and digital signal processing circuitry to develop the system. The switching amplifiers use less energy than linear amplifiers and are smaller and more lightweight. They drive the high force motor speakers to deliver the same acoustic output as heavier conventional speakers. Control circuitry was then combined with both these components to deliver sound at concert hall volume while reducing total power consumption by half.

The system was also fitted into the Nissan Leaf electric car. However, Bose is not the only company to have developed such technology in recent years, with Toyota fitting the JBL GreenEdge system into some of its vehicles, particularly the Prius V.

For other environments in the home and elsewhere, music systems are being developed with built-in smart energy devices. For example, LG has incorporated them into its wireless speaker range, particularly the H3, H5 and H7. Other companies have also developed energy efficient hi-fi systems, such as the intelligent amplifier power supply produced by German company T+A Elektroakustik. This adapts the power input to the actual need in order to reduce energy consumption and heat production and it has been fitted to home cinema units such as the K6 and M820 Dolby Surround systems.

Gaming is another area of modern gadgetry that tends to ramp up the energy consumption. Fortunately, modern consoles have become increasingly energy efficient.

In 2008, the US National Resource Defence Council (NRDC) produced a report that looked at the gaming industry and how much power consoles actually use. NRDC has since conducted a follow-up study involving lab tests on the Nintendo Wii U, Sony PlayStation 4 and Microsoft Xbox One. All three consoles have energy efficiency features built into them but the PS4 and the Xbox One suffer from a consumption level two to three times that of the more recent models of their predecessors. The Wii U meanwhile consumes less energy than the Wii but still manages to provide higher definition graphics and processing capability. The Wii U’s very low power in connected standby mode is a major reason for this.

Nevertheless, NRDC finds that modern game consoles will consume as much electricity per year as all the homes in Houston, the fourth largest city in the US. Most of this will be produced by the standby mode throughout the night when the console is actively listening for voice commands (Xbox One) or keeping the USB ports active (PS4). NRDC's latest report recommends a series of measures, mostly involving settings or user interface changes. These measures could be implemented quickly on new products and on existing consoles via software updates. However, other products would need more radical hardware changes.

With regard to PC gaming there are a number of ways to reduce power consumption, usually involving scratch building with selective use of components. There have been several studies looking into this, one of the most recent being Berkeley Lab’s Taming the Energy Use of Gaming Computers.

In the meantime, here is a simple case study. Loyd Case of PC World built a system from scratch that can idle at under 70 watts, consuming only 336 watts even while running an eight-core Prime 95 and 3DMark 2011 at 2560 by 1600 resolution. It also has LGA 2011 hardware, including a quad-core Sandy Bridge Extreme CPU and 16GB of RAM. The tower case is a Corsair Obsidian 550D midsize-tower chassis which is designed to minimize noise and has a front cover which also helps reduce noise. There’s some hefty soundproofing in there as well. Case said that the key to reducing power consumption involved choosing the right power supply, so he chose a single high-performance graphics card with two PCI Express graphics connectors. The Antec Earthwatts Platinum 650W unit is 80 Plus Platinum certified, which means that it must maintain close to 90 percent energy efficiency throughout its range. There is all sorts of other bits in there as well, and the result is a system with low max power consumption but which is still highly efficient.

So it’s possible, if you know a thing or two about building PC’s from scratch.

The second part of this article will examine computers, cookers and washing machines, as well as a few hints with regard to encouraging the use of these appliances as efficiently as possible.