Inspired by the beauty of the sky when he was a kid, high-school graduate Frank Kovac built the largest rolling, mechanical, globe planetarium of the world in his backyard.

Frank Kovac, an ordinary guy from Wisconsin, fell in love with the sky at the age of 13. In over ten years, he built his own planetarium. Although he wanted to be an astrophysicist, he had to give up on his college degree. But, he never gave up on his dream, even when his friends called his project the 'sanitarium' because what he does was insane to them.

Surely, building a planetarium by himself was quite a task for Frank Kovac. Besides the astrophysical and mathematical knowledge, he also needed some serious engineering skills. But, after all, his passion won over.


Planetariums are basically theaters with domes, surrounding visitors with the projection of the universe for educational and entertainment purposes. By creating hyper-realistic celestial scenes, planetariums simulate the motion in the heavens. The large variety of technologies used in planetariums include precision-engineered 'star balls' that combine electro-mechanical and optical technology, lasers, video, full dome projector systems, and slide projectors.

Kovac built his own telescope when he was 16 by using plywood for the support base and a tube that is originally for making concrete. His telescope was powerful enough to show the gap in the rings of the planet Saturn and the moons of Jupiter. However, Kovac thinks that the coolest thing he has ever made is his homemade planetarium.

Even if he says that he is not good with numbers, Kovac clearly has some engineering skills. But still building a planetarium is not easy at all. To cover all his project weighs about 4.000 pounds, he had the foundation to built around cost about a $180.000 over almost a period of 10 years. He basically explains the structure as;

"The globe is mostly sheets of plywood, some panel board. The motor drive is a half horsepower gear motor. The globe itself is mechanically operated it actually revolves around the audience and it is one of two others in the world and it is the largest." 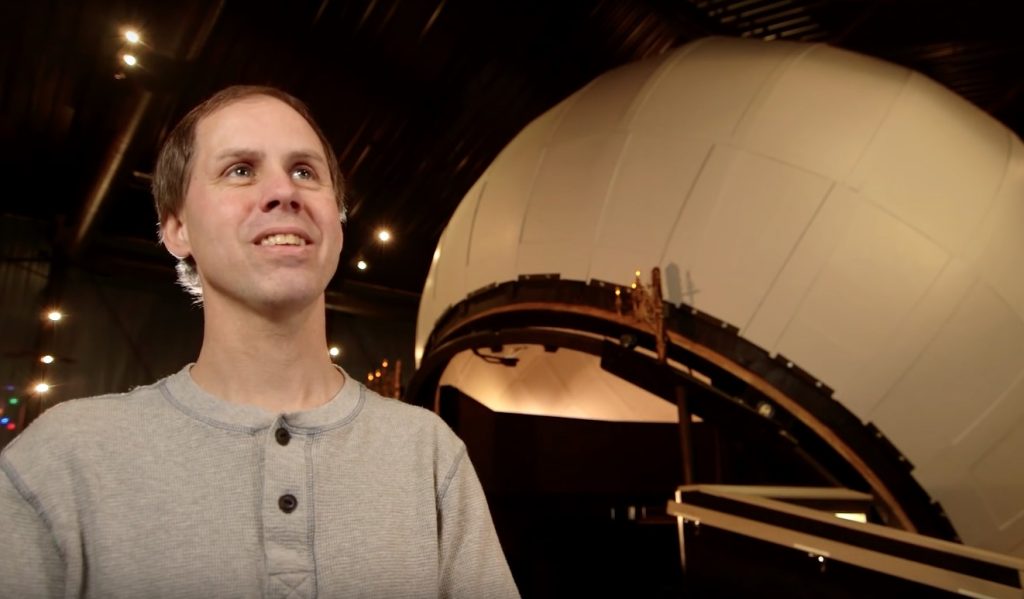 Kovac built a 22-foot-diameter, two-ton globe tipped at 45 degrees based on the latitude of Wisconsin. Furthermore, he meticulously hand-painted over 5,000 stars by focusing on the exact position and brightness of each.

"I was able to plot each star with glow in the dark paint. I painted all 5,000 stars by hand with a tiny paintbrush one dot at a time which took about five months if you average eight hours a day. It was really painstaking on my neck, my back, spent many hours upon the ladder and I would even actually go outside on the clear nights to compare how mine looked in here and if I wasn't happy with it, I would get out the paint and put more paint on a certain star."

Planetariums are basically theaters with domes, surrounding visitors with the projection of the universe for educational and entertainment purposes. By creating hyper-realistic celestial scenes, planetariums simulate the motion in the heavens. The large variety of technologies used in planetariums include precision-engineered 'star balls' that combine electro-mechanical and optical technology, lasers, video, full dome projector systems, and slide projectors. 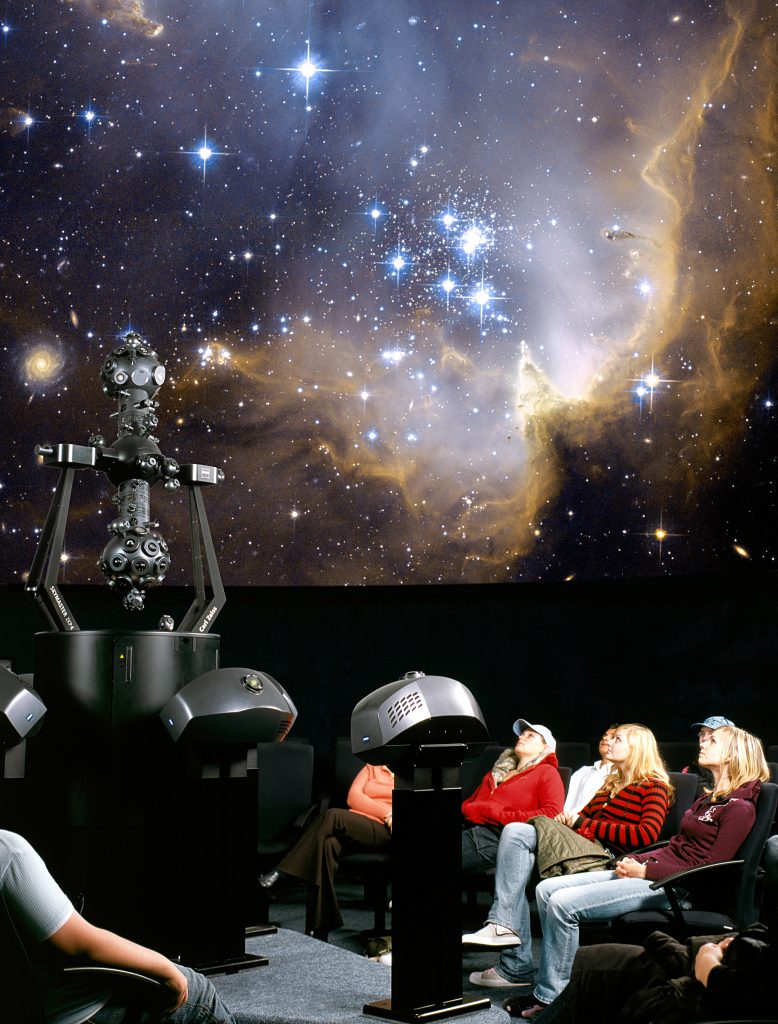 Historians say that the earliest known depiction of the sky goes back to Senenmut, an Egyptian tomb from 1500 BCE. Following that, many scientists from various civilizations intended to build planetariums. In 500 BCE, Etruscans built the “The Dome of Heaven”, the oldest known domed building in the history. Even Greek philosopher Plato played a role in developing planetariums by discussing that most humans perceive reality as shadows from projections on the inside of an enclosed space in his famous "Allegory of the Cave".

Farnese Atlas , the statue of the Greek Titan Atlas carrying the globe on his shoulders, is probably the oldest preserved globe. The position of the constellation figures to the globe's equinox date the globe itself to 370 BCE, whereas the statue of Atlas is dated 73 BCE. During the 250 BC, the Greek engineer, mathematician, astronomer, physicist, and inventor Archimedes demonstrated a cast-metal globe showing the motions of the planets for the first time ever, which Cicero later saw and described. 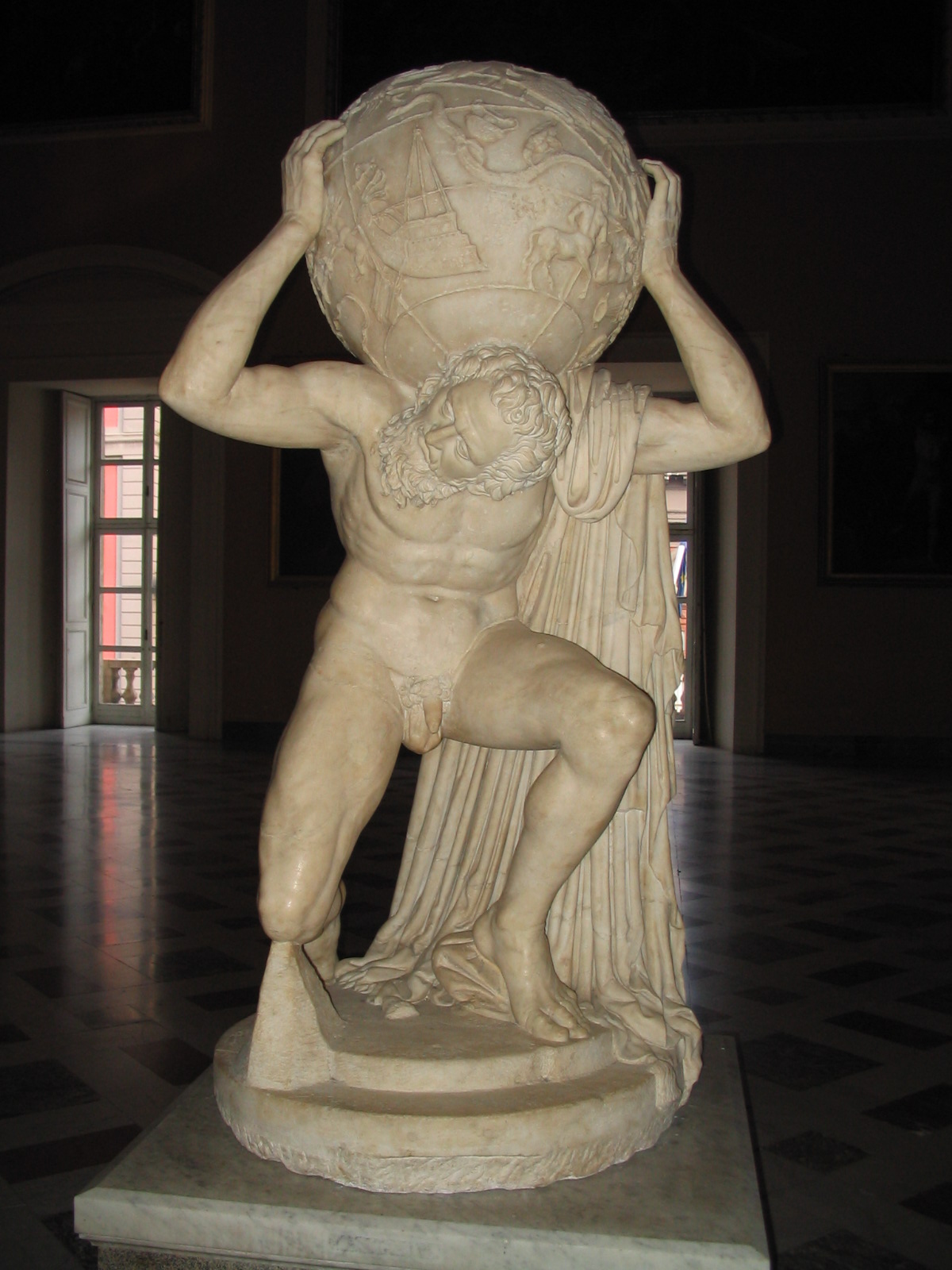 Around 50 BC, Egyptians built the Hathor Temple at Dendera. It contained two representations of the heavens. While the round zodiac ceiling showed the whole sky as it was understood by both Egyptian and Greek cultures; square zodiac in the outer hypostyle hall was containing images of Taurus and the Libra as well as dates of eclipses. 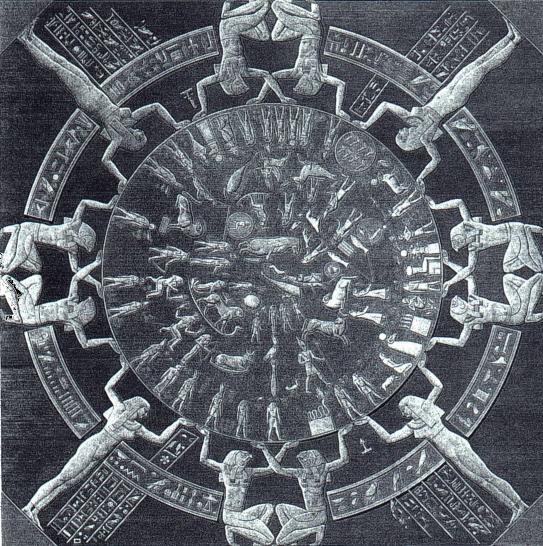 During 62 CE, Emperor Nero has built a large-scale portico villa named the Golden House, including a dome rotating with the sky in the heart of ancient Rome. But surely the late 16th century has been a milestone for the evolution of planetariums. Following the Celestial Globe of Tycho Brahe, Globe of Gottorf, Navajo 'Star Ceilings' in Canyon De Chelly,  Eise Eisinga built a planetarium in Franeker, a province of Friesland, Netherland, between 1774–1781. It is now the oldest working planetarium in the world. 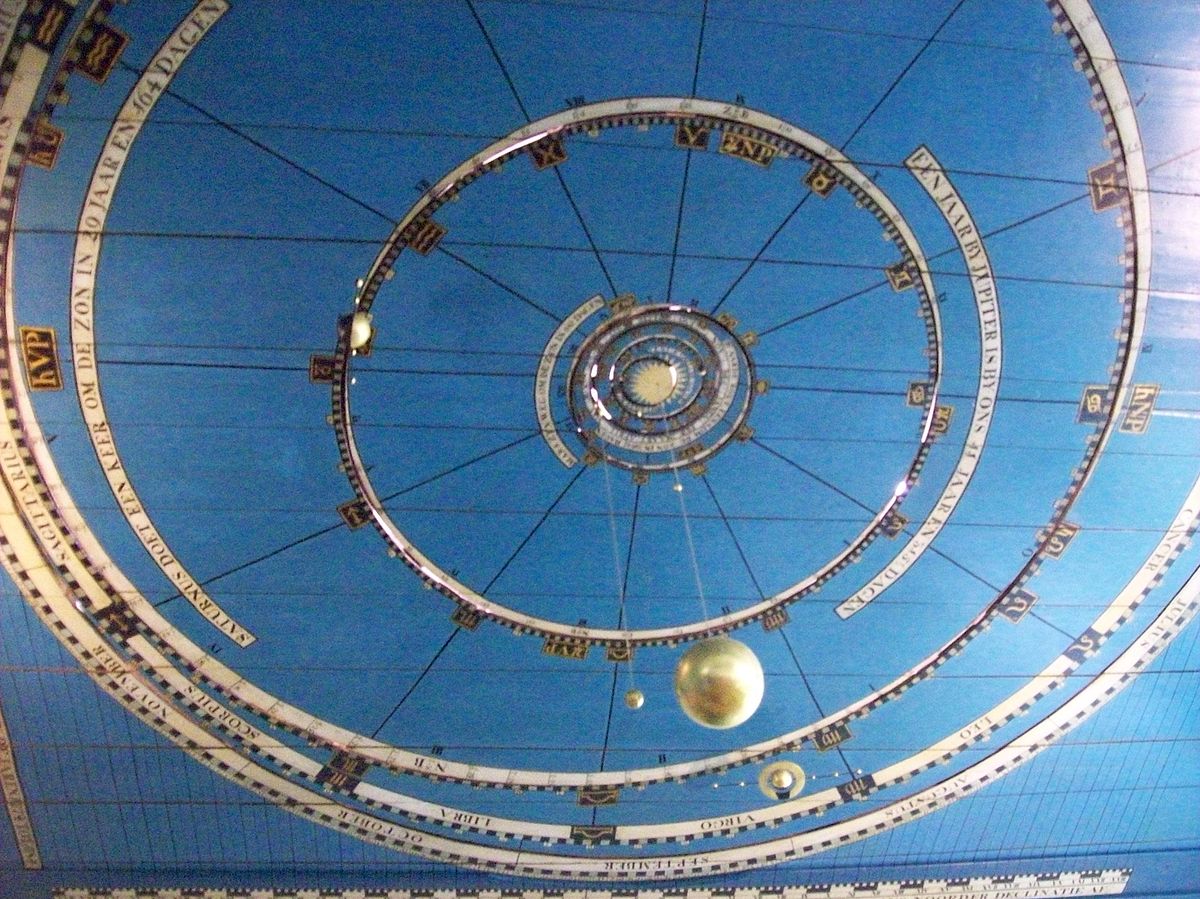 The second important milestone in fields of astronomy and physics has been the foundation of Carl Zeiss Company, founded in 1846, which later became the leading name of the high-quality optical goods.
Invented by Prof. E. Hindermann in Basel in 1912, orbitoscope has taken scientists into a new era. The year after, in 1913, the Museum of the Chicago Academy of Sciences built the Atwood Globe with a diameter of almost five meters showing 692 stars and a moveable light bulb representing the Sun. 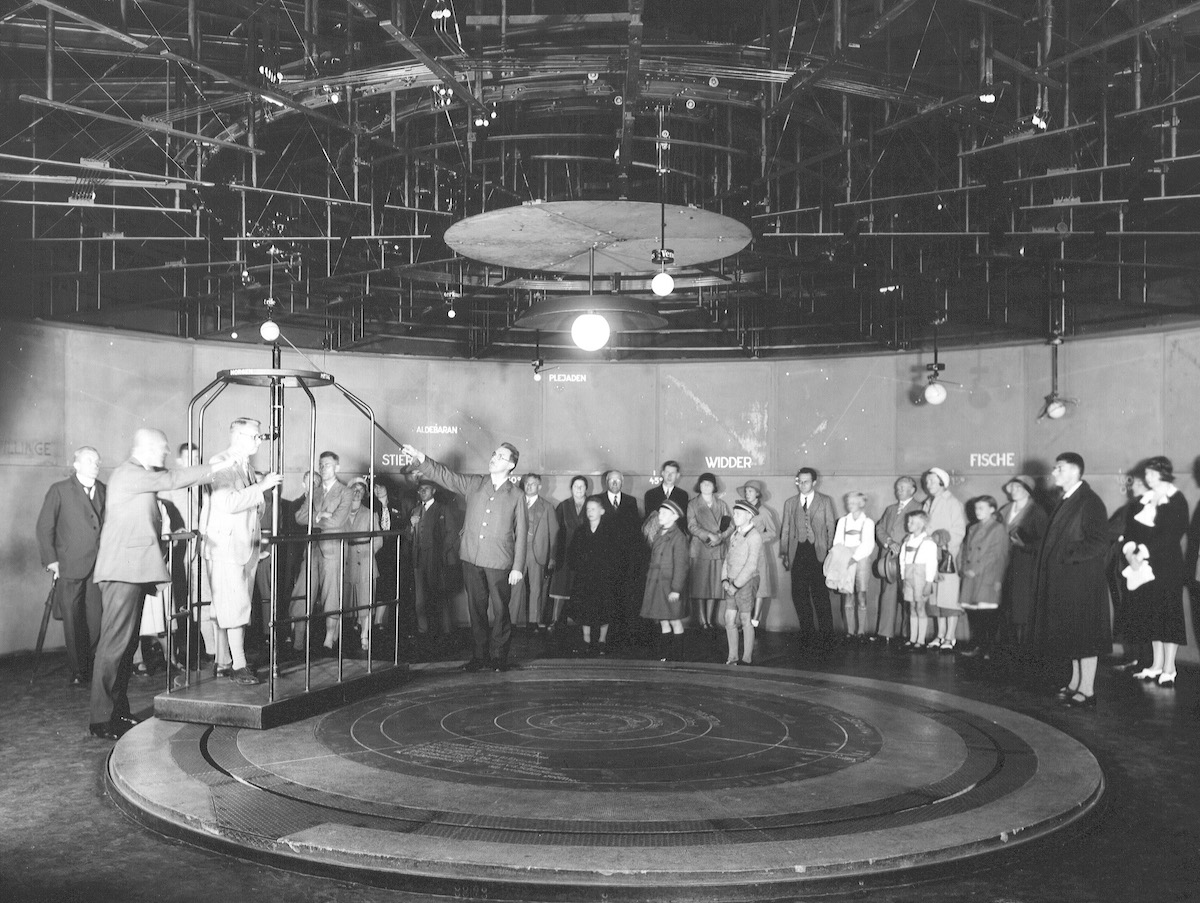 As for the Kovac Planetarium, it is big enough to welcome 25 people at once. But even if only a few people show up, Kovac always sticks to the program schedule. He is still using an electrically powered machine with a variable speed motor controller; because he can't afford to have a new projection system yet. However, Kovac still works full-time in the paper mill, and he believes that if more visitors visit his planetarium he may be able to upgrade the Kovac Planetarium.

SEE ALSO: The 3D Atlas of Our Universe Redefines Our Sense of Home