A man in the UK was surprised to receive a single copy of the animated film, The Boss Baby, after ordering a domestic bitcoin mining rig off Amazon.

A man trying to cash in on the cryptocurrency hype has inadvertently been left with a copy of the DVD The Boss Baby. Ichim Bogdan Cezar, ordered $4,100 worth of bitcoin-mining hardware on Amazon, however when the package arrived all it contained was a copy of the DreamWorks animated film. Cezar ordered a Tanli ASIC Processing Bitmain AntMiner S9 with the intention of shipping it on to his brother-in-law in Romania, as the online store couldn’t deliver there. Much to his surprise his anticipated delivery only contained a single copy of the popular DVD. It reportedly took some time for Cezar to get a refund from the third-party Amazon seller that caused the mix-up. Eventually, the situation was resolved with some help from the online giant who later issued an apology.

While it is unclear if Cezar managed to secure the sought-after hardware elsewhere, getting the DVD and subsequent refund might have been good luck after all as the cryptocurrency has tumbled in value over the last month. Bitcoin has lost nearly 20 percent of its value over the last 30 days of trading.

If Caesar had managed to ship the desired Tanli ASIC Processing Bitmain AntMiner S9 to his brother-in-law they would have used it to mine cryptocurrencies. The product comes from Bitmain, a hardware company that specializes in cryptocurrency mining rigs. Bitcoin mining works by ‘miners’ using special software to solve complex math problems that contribute blockchain to the ledger, miners are issued a certain number of bitcoins in exchange for this labor.

The mining hardware Cezar was after could let you earn up to 0.11 Bitcoin per month. Website 99bitcoins calculated the use of the machine in a typical home in the US, based on energy and bitcoin price of August 2017. According to their data, you would earn about $4,032 in the first year. So in Cezar’s case, you still haven’t even paid off the hardware outlay. 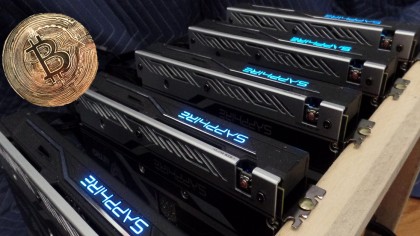 The equipment is also a very heavy user of power. Domestic mining operators need to consider the way they use the power in their homes or offices to avoid being hit with a huge bill. China currently contributes the most blocks to the chain and has large industrial operations. The government recently announced it would begin the process of shutting down some of these operations in an effort to minimize the effects on the environment as well as be vigilant against possible fraud. The price of the equipment is also very high and can increase as the value of the currency also increases. If you are thinking of trying your hand at bitcoin mining do a lot of reading first and check out some bitcoin mining calculators to see if the numbers add up.