Marine Energy – harnessing the power of the sea

Alongside wind, marine energy is one of the renewable energy markets currently dominated by the UK with around 10MW of wave and tidal energy being tested in waters around the country. This is more marine energy power than is deployed in the rest of the world combined. At present, the two main centers of activity in the sector are Wavehub in Cornwall and the European Marine Energy Centre (EMEC) in Orkney, Scotland. These are state-of-the-art research facilities that enable developers to test their devices under real sea conditions with planning consents and grid connections already in place.

Additionally, there is the Seagen tidal stream generator in Northern Ireland’s Strangford Lough, which has operating since 2008 and has generated over 9 gigawatt hours (GWh) of power as of March 2014. Another project, known as Meygen, is currently under development in the Pentland Firth, Scotland. This is the world’s first tidal stream array and the overall UK objective with regard to marine energy is to have ten such arrays reaching financial close across Europe by 2020, the bulk of which will be deployed in the UK.

The UK’s first ever wave energy development company was WaveGen, founded by Allan Thompson and based in Inverness, Scotland. Voith Hydro bought the company in 2005 but closed it down in 2013. The company was notable for being the first ever wave energy business to connect a commercial scale device, known as LIMPET (Land Installed Marine Powered Energy Transformer) and located on the Scottish island of Ismay, to the national grid. LIMPET was a shoreline device that produced power from an oscillating column of water. It went into operation in November 2011 and is still generating electricity today.

Aquamarine Power was founded in 2001 following research conducted by Professor Trevor Whittaker’s development team at Queen’s University in Belfast, Northern Ireland with regard to the potential of flap-type wave power devices to reduce energy costs. This resulted in the development of the Oyster wave energy device which in turn attracted the interest of Allan Thompson who funded further research and development work on Oyster. Thompson subsequently set up Aquamarine Power in order to bring the device to the commercial market. In 2007, the new company managed to secure an investment of £6.3 million from Scottish and Southern Energy (SSE), as well as further investment of £1.5 million from the Sigma Capital Group. This enabled it to advance Oyster from scale model testing to full-scale sea trials. The first full-scale prototype was completed in 2008 and installed at the European Marine Energy Centre (EMEC) in Orkney in 2009. It was at EMEC that Oyster 1, as it was known, first began to produce power for the grid. ABB became a shareholder in 2010 and the company installed a next-generation device, Oyster 800, at EMEC in 2011. This device is still undergoing operational testing, but it has been demonstrated at EMEC for over three years during which it has survived some of the largest storms of the decade.

Oyster has a maximum generating power of 800 MW and is essentially a wave-powered pump with a width of 26 metres, deployed at a depth of around 13 meters and a distance of 500 meters from shore. It incorporates a hinged flap which moves according to the motion of nearshore waves. This in turn drives two hydraulic pistons that push high pressure water onshore via a subsea pipeline to drive a hydro-electric turbine. The idea is that at some point in the future several hundred wavepower devices will connect to a single onshore plant, thereby creating a wave farm which generates hundreds of megawatts of electricity. The Oyster is deployed nearshore in order to capture the maximum amount of wave generated energy while also being protected from the severe storms further out to sea. 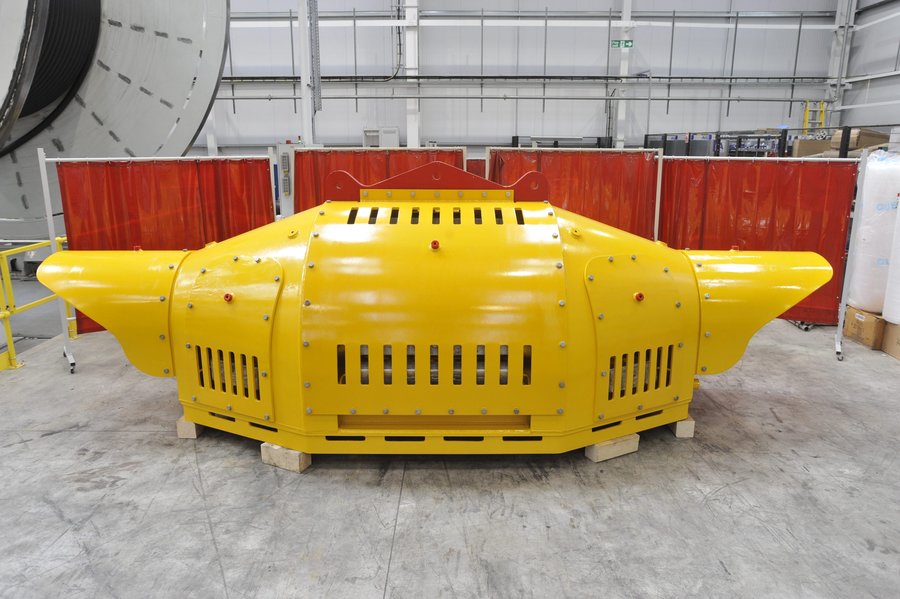 Wavehub is pretty much how it sounds. A hub that sits on the seabed with a number of sockets that wave energy devices can connect into. It is a testing and development facility located 16 kilometers off the northern coast of Cornwall, near Hayle. It allows for the connection of four different types of wave energy device at one time. A cable runs from Wavehub onto shore, connecting the devices with the national grid via substations incorporating 33kV and 11kV switchgear. The facility was funded by the UK government and the European Regional Development Fund and its aim is to accelerate and support the development of offshore renewable energy technology, drive research and innovation and support the deployment of marine energy devices at large scale, overcoming the challenges facing commercialization. Three companies have already signed up to have their devices connect in to Wavehub. These are Ocean Power Technologies Ltd, Fred Olsen Ltd and Ocean Prospect. A fourth, Carnegie Wave Power, will deploy its CETO 6 device in 2018.

The European Marine Energy Centre (EMEC) is based on Orkney in Scotland which is an ideal location for a test center because of the powerful wave regime, strong tidal currents, grid connection, sheltered harbors and an already present expertise in renewable, maritime and environmental matters. The facility was established in 2003 and has 14 grid-connected test berths as well as two scale test sites where smaller devices or those at an early development stage can obtain real sea experience. The center also provides consultancy and research services and is working with Marine Scotland to streamline the consenting process for the sector.

Worldwide, the potential of wave power has been estimated to be over 2 terrawatts (TW) with the most promising locations being the waters off the western coasts of Europe, the north coast of the UK and the Pacific coastlines of North and South America, Southern Africa, Australia, and New Zealand. With regard to wave energy technology outside the UK, the main areas of interest are Australia where Ocean Power Technologies is active, Portugal and the US. Most of the really interesting projects are in Europe and the UK.