The Fort Indiantown Gap Army Reserve in Annville, Pennsylvania recently obtained a new helicopter training facility. Safety personnel on the base performed a full-scale test of their equipment and filmed the glorious event for our viewing pleasure.

A new video reveals the impressive power of fire suppressing, quick-expanding foam in a helicopter hangar in the United States as it fills the space almost to the brim.

The clip was filmed at The Fort Indiantown Gap Army Reserve in Annville, Pennsylvania which recently obtained a brand spanking new helicopter training facility as well as a shiny new hangar capable of holding eight choppers.

With a new building like this, comes state of the art bells and whistles, including a hyper sensitive fire-suppression system that quickly fills the giant space in a matter of minutes. Safety personnel on the base performed a full-scale test of their equipment and filmed the glorious event for our viewing pleasure.

You see the foam cascading from pumps in the roof of the hangar, covering the dummy objects meant to represent helicopters.

The foam is typically used in environments containing highly flammable materials and liquids. The foam smothers fuels and other substances so that oxygen can’t feed the fire.

Just last month a similar system at the Lufthansa hangar at the Auburn-Lewiston Municipal airport in Maine accidentally went off, trapping four people inside. Luckily the crew members were able to escape to higher ground and avoid the onslaught of foam with minor injuries. By the time the system was shut off the foam had reached heights of up to 8 meters.

“At one point, a truck driving through the foam appeared to hit the building. Foam poured onto the lawn around the hangar and onto cars in the parking lot, looking like out-of-season snowbanks,” reported the Sun Journal at the time.

Similarly, in 2012, The Elgin Air Force Base in Florida had an incident when a spark from a welder set off their foam suppression system. The foam expanded in two minutes, engulfing an F-16, F-15, and A-10 fighter jet and filling the 90,000 square-foot hangar.

In layman’s terms, the foam used in these situations is a stable mass of small, air-filled bubbles. All of which have a lower density than oil, gasoline, and water. The foam is made of three ingredients; water, foam, and concentrate. Ansul, the distributor of the high expansion foam used in the Mewiston Municipal Airport incident, told the fire chief for the area that the substance is “essentially a dish detergent and basically (once someone comes in contact with it), it's a simple flushing of the person, get them a shower and get them cleaned up.” 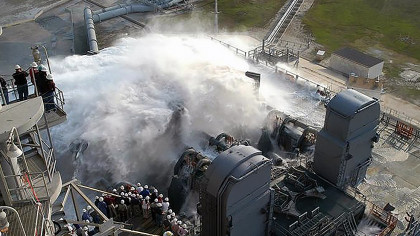 According to Chemguard, another distributor, the foam works in multiple ways; “The foam blankets the fuel surface smothering the fire, separates the flames/ignition source from the fuel surface, cools the fuel and any adjacent metal surfaces and suppresses the release of flammable vapors that can mix with air.”

Who knew there were so many important uses for a slippery substance prevalent at many a foam party?