Serious reforestation efforts are underway in Brazil this year thanks to the actions of Conservation International in spearheading a historical project, along with the collaboration of local and international organizations.

The end of the twentieth century witnessed the beginning of the mobilization of efforts to protect the Brazilian Amazon rainforest, which began to disappear at an alarming rate.

For this reason, a new project in the Amazon for reforestation in the region—which would amount to 70,000 acres—is currently under way. That translates to roughly seventy-three million trees in the region at the edge of Brazil’s Amazonian region known as the Arc of Destruction. It’s comprised of the states of Rondônia, Pará, Acre, Amazonas, and the Xingu watershed, and is considered a place “where close to half of the world’s tropical deforestation occurs, largely due to unplanned clearing for pastureland.”

Announced back in September, Conservation International (CI) is leading the efforts, along with the World Bank, the Brazilian Ministry of Environment, the Brazilian Biodiversity Fund, The Global Environment Facility and “Amazonia Live”, the environmental branch of Rock in Rio. This will no doubt be a tremendous coordination of efforts, but CI is up for the challenge.

M. Sanjayan, CI CEO, discusses the important connection between repopulating forests and creating a tone of cooperation among international governments on climate control:

“If the world is to hit the 1.2°C or 2°C [degrees of warming] target that we all agreed to in Paris, then protecting tropical forests in particular has to be a big part of that,” elaborating, “It’s not just the trees that matter, but what kind of trees. If you’re really thinking about getting carbon dioxide out of the atmosphere, then tropical forests are the ones that end up mattering the most.”

Sanjayan also commented on how this project’s design and execution will be vastly different from many before, perhaps to quiet critics who point at the history of failed conservation projects in the region from the past three decades: “This is not a stunt,” adding firmly, “It is a carefully controlled experiment to literally figure out how to do tropical restoration at scale, so that people can replicate it and we can drive the costs down dramatically.” 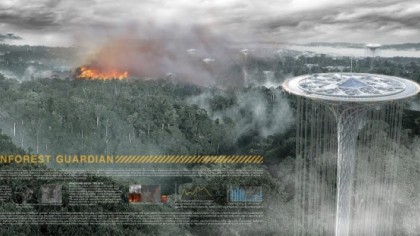 The Rainforest Guardian: Spaceship like irrigation skyscraper for Amazon rainforest

Although the partnership implies a high-level leadership level of support—which is essential for legitimizing the project and securing the needed funding and resources—CI is quick to acknowledge the instrumental role that local farmers and indigenous populations will play in terms of achieving long-term success. In order to rally local support and create a tone of self-empowerment, families are compensated about $700 for every hectare that is reforested. All this happens under the guidance and support of project sponsors.

One of these strategies is muvuca, the name of a farming technique, which in Portuguese means “a lot of people gathered in one place”, and it directly supports the aims of CI’s project because the goal is not only replanting, but doing so in a way that biodiversity will be restored and allowed to flourish.

“With plant-by-plant reforestation techniques, you get a typical density of about 160 plants per hectare,” says Roberto Medeiros, CI’s Vice President in Brazil. “With muvuca, the initial outcome is 2,500 species per hectare. And after 10 years, you can reach 5,000 trees per hectare. It’s much more diverse, much more dense, and less expensive than traditional techniques.”

At present roughly two million trees have already been planted, in large part due to these smart incentives. Medeiros sees signs of life already returning to the area: “Springs, rivers, and streams that were suffering from the lack of water are already beginning to show signs of recovery in the region,” adding that local farmers will see the economic benefits as well in terms of increased crop yield.

Via: BBC, US14, Conservation International