Auroras, or light displays, are expected today and tomorrow through a large and impressive trajectory of countries stretching from Russia to North America due to the effects of a powerful solar storm.

The effects of a solar storm are due to hit the Earth later today and scientists have started issuing warnings and other information about the strength of the storms and any potential effects it will have. This update came yesterday from the Space Weather Center of the National Oceanic and Atmospheric Administration.

There is still excitement in the air in North America after August’s solar eclipse, and according to the radar images generated, people living in the northern half of the United States and southern Canada should have the best view of the G3-level storm. The Weather Center upgraded the storm to this level just yesterday. Also along the viewing trajectory of the storm are large parts of Russia as well a small tract of Northern European countries. 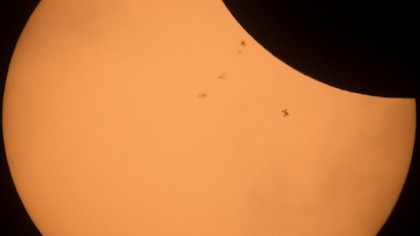 Those living in Northern European regions, such as Scandinavian countries and Russia, are quite used to the lights display, but for people in North America, however, it’s a unique and special treat. Later in the day or in the early hours of Thursday are the optimal time for viewing the aurora.

For most of us, we think of the sun as only emitting light and energy and give small consideration to other phenomena or their effect on life on our planet. The phenomenon of auroras, however—or the well-known North Pole variety of aurora borealis or Northern Lights—occur due to solar storms. When the sun sends out a powerful jolt of radiation and charged particles from its surface known as CMEs or coronal mass ejections, the charged solar particles collide with the surface of the Earth. The result, essentially, is a reaction with the Earth’s electromagnetic field. The speed at which these bursts of energy are traveling towards the Earth’s surface is truly remarkable, and the particles are attracted most strongly to the geomagnetic poles on the Earth, which explains why most auroras observed are in the Northern extremities of the Earth.

What are the effects on earth?

As the energy from the sun interacting with the electromagnetic field of the Earth’s surface explains the occurrence of auroras, the extent of its effects on us is directly related to the area it covers. University of Leicester Solar Terrestrial Physics Professor Mark Lester explains, “If the aurora expand to lower latitudes than normal, there could be problems to oil pipelines, transformers, power grids, anything with a metal conductor.”

Typically, what we can see for aurora at higher latitude is radio interference, but scientists are quick to point out that this will not have a major impact on safety for those traveling today or tomorrow, even for those traveling through flight paths close to the Northern or Southern Poles. That being said, there is “elevated radiation risk to passengers & crew in high-flying aircraft at far north or south latitudes,” according to a NOAA warning.

Despite warnings about the strength of the solar storm, for us here on Earth we can enjoy the show without too much worry.