A new study calculates that our sun may produce a very rare and very power 'superflare' in the next 100 years, threatening electronics systems around the globe.

Solar flares are a common phenomenon and generally don't pose much risk to the Earth but now scientists at the University of Colorado at Boulder (UCB) say that within the next 100 years, Earth may be in for a much rarer--and far more powerful--wallop from the sun in the form of a so-called superflare, putting the planet's electronics infrastructure at risk.

Superflare May Erupt from Sun in Less Than 100 Years, Threatening Global Electronic Infrastructure

Presenting the UCB research at the 234th meeting of the American Astronomical Society in St. Louis, Missouri, Yuta Notsu, of the National Solar Observatory in Boulder, Colorado and a visiting researcher at UCB--as well as the lead author of the paper published last month in The Astrophysical Journal detailing the researchers' findings--said that "our study shows that superflares are rare events, but there is some possibility that we could experience such an event in the next 100 years or so."

Until now, astronomers studying the outer reaches of the Milky Way have witnessed one of the galaxy's most brilliant displays of pyrotechnics, a superflare. So far, scientists aren't sure what is causing these gargantuan eruptions of energy--which can be seen from hundreds of light-years away--but they have assumed that it is the product of very young, very active stars rotating very quickly and with lots of fuel to burn.

Notsu and his colleagues from Kyoto University, the National Astronomical Observatory of Japan, University of Hyogo, University of Washington and Leiden University found that while superflares don't often erupt from older stars like our sun, they do still occur once every several thousand years. In the past, these events would have produced spectacular auroras but otherwise wouldn't have posed much threat to humans on the ground, thanks to the Earth's magenetic field which helps shield the planet from solar weather events.

After all, for the nearly two hundred thousand years where humans have been running around on Earth, humanity would have been subjected to dozens of superflare events and we came through it just fine. What makes this go-around different though is now we have electronics, that revolutionary invention that enables all of our modern technology but which are very susceptible to high-energy radiation like those produced by solar flare events.

"The explosive heat of a solar flare can't make it all the way to our globe," NASA says, "but electromagnetic radiation and energetic particles certainly can. Solar flares can temporarily alter the upper atmosphere creating disruptions with signal transmission from, say, a GPS satellite to Earth causing it to be off by many yards. Another phenomenon produced by the sun could be even more disruptive. Known as a coronal mass ejection or CME these solar explosions propel bursts of particles and electromagnetic fluctuations into Earth's atmosphere. Those fluctuations could induce electric fluctuations at ground level that could blow out transformers in power grids. A CME's particles can also collide with crucial electronics onboard a satellite and disrupt its systems."

How much more disruptive would a superflare be? It's hard to say because the damage would seem to be incalculable. A superflare even a hundred times more powerful than what we normally experience would almost certainly hit every unprotected electronic system on Earth in some fashion, disrupting or outright crippling powergrids around the world, disabling machinery and manufacturing, blowing out cell phones, satellites, and all the rest. Transportation systems depend on electronics, as do utility systems, communications systems, in short: everything could just stop working overnight, even though we probably wouldn't feel a thing.

If the superflare was thousands of times more powerful than normal? For all we know, it could send humanity back to the Age of Sail practically overnight--at least until we can repair or replace the entire planet's electronic infrastructure, a tall order when you have no power transmission to manufacture replacement electronic components and we're all reduced to communicating using carrier pigeons and old fashioned letters.

Considering their destructive potential, we really should be grateful that we know about them at all. Superflares are actually a fairly recent discovery, thanks to the unexpected observation of these events by the exoplanet-hunting Kepler Space Telescope. Launched in 2009, the Kepler Space Telescope looks for exoplanets by staring at distant stars and measuring the intensity of its light. Sudden--but regular--dimming in a star's luminosity is strong evidence of exoplanet transit and this technique has become the primary means of identifying exoplanets in the galaxy, revealing 4,003 exoplanets so far, with many more that still need to be confirmed.

While staring into these foreign suns, however, the KST also saw something else that was entirely unexpected: sudden "flashes" of highly-increased luminosity followed by a rapid return to normal levels. 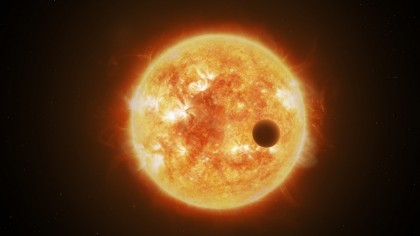 The amount of energy required to produce the readings scientists kept seeing in the data returned by the Kepler Space Telescope prompted them to label these events superflares and their implications for life on Earth prompted scientists at UCB to begin trying to assess the likelihood of a superflare event much, much closer to home.

"When our sun was young, it was very active because it rotated very fast and probably generated more powerful flares," Notsu said. "But we didn't know if such large flares occur on the modern sun with very low frequency."

Using data from the European Space Agency's Gaia spacecraft and the Apache Point Observatory in New Mexico, the UCB team cataloged stars that were shown to have ejected a superflare. Then, Notsu and his colleagues conducted a series of studies to distill this set of superflare-producing stars into list of 43 stars that were roughly comparable to the sun. They then used statistical analysis to determine the frequency of superflare events from sun-like stars.

They found that younger stars produced many more superflares than older stars, which was expected, but older stars like our sun still have some punch left in them yet.

"Young stars have superflares once every week or so," Notsu said. "For the sun, it's once every few thousand years on average."

There's no way to tell when the next superflare may erupt from the sun, but Notsu stressed that it's a question of when, not if, such a flare will occur. We still likely have time to protect our infrastructure from such a superflare when it does occur, however.

"If a superflare occurred 1,000 years ago, it was probably no big problem. People may have seen a large aurora," he said. "Now, it's a much bigger problem because of our electronics."