Material Created with the Elasticity of Rubber and Hardness of Metal

The new material takes its inspiration from humans' largest organ, their skin.

Like describing a character out of a DC comic, researchers from North Carolina State University have developed a fiber that combines the strength of metal with the elasticity of rubber.

This revolutionary new material has a host of applications that could be used in the developing world of AI robotics, packaging and manufacturing.

A deep cut for those familiar (or obsessed with DC comics) Rubberband Man is anti-hero with the ability to stretch his body to incredible lengths and withstand tremendous damage, thanks to his extremely durable body. The new material behaves in a similar way.

Rubber bands have the ability to stretch really far using very little energy, while metal wires take tremendous energy to move or even be shaped. As stated by Michael Dickey, Alcoa Professor of Chemical and Biomolecular Engineering at NC State, “Our fibers have the best of both worlds." 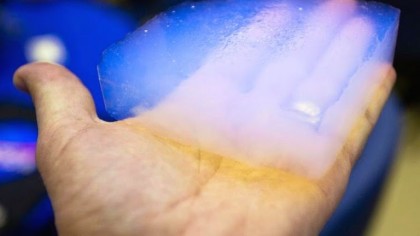 So what’s it made of? Researchers created these new fibers using a gallium metal core surrounded by an elastic polymer sheath. Even while placed under tremendous stress the fiber has the strength of a metal core.

If the metal were to break the fiber does not fail as the polymer sheath absorbs the strain between the breaks in the metal and transfers the stress back to the metal core. Think of it as a relationship similar to the way human tissues holds together bones.

"Every time the metal core breaks it dissipates energy, allowing the fiber to continue to absorb energy as it elongates,” describes Michael Dickey.

"Instead of snapping in two when stretched, it can stretch up to seven times its original length before failure, while causing many additional breaks in the wire along the way. To think of it another way, the fiber won't snap and drop a heavyweight. Instead, by releasing energy repeatedly through internal breaks, the fiber lowers the weight slowly and steadily."

As mentioned above, the material has some similarities to human organs, more specifically, human skin. Dickey and his team have taken inspiration from the human body as human skin itself has elastic properties that keep our bodies stay safe under tremendous pressure.

"This is only a proof of concept, but it holds a lot of potential. We are interested to see how these fibers could be used in soft robotics or when woven into textiles for various applications,” says Dickey.