The super-light supercapacitors could one day become biosensors in patient clothing for more accurate monitoring.

Wearable technology could be on the verge of becoming a massive industry. However, manufacturers seem to consistently hit a snag in developing energy storage systems as thin and lightweight as the fabric of the clothing. A new creation from materials engineers might help streamline wearables production for any garment.

Chemists from the University of Massachusetts Amherst developed the revolutionary charging system. The team was led by materials chemist Trisha Andrew.

As Andrew explained, “Batteries or other kinds of charge storage are still the limiting components for most portable, wearable, ingestible or flexible technologies. The devices tend to be some combination of too large, too heavy and not flexible.”

Andrew and the team used a micro-supercapacitor for energy, dispersed through vapor-coated conductive threads. They also used a unique sewing technique to create a flexible mesh of electrodes on the cloth backing. As a result, the device has considerably more charge than expected for its size. The researchers found it could easily power wearable biosensors. 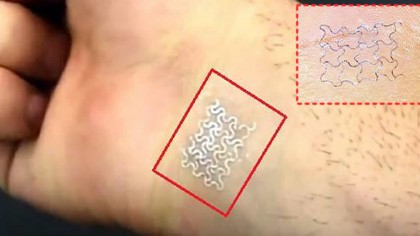 This New Paper-Based Wearable Sensor Could Save Patients Lives

"With this paper, we show that we can literally embroider a charge-storing pattern onto any garment using the vapor-coated threads that our lab makes. This opens the door for simply sewing circuits on self-powered smart garments."

The team found in preliminary studies that supercapacitors are the most ideal candidates for wearable charging storage circuits. They said it was because of the inherently higher power densities found in the supercapacitors compared to standard batteries.

However, the UMass researchers needed to upgrade the standard supercapacitor. They added electrochemically active materials to boost performance, despite challenges around adding them. Andrew and the team showed that their particular vapor coating process makes porous conducting polymer films and thick yarns.

Electrolyte ions can be added to the yarns in order to boost the storage capacity per unit. Weaving more power into the yarns is more effective than treating dyes or additional fibers, the team said.

Andrew had to defend her decision to use vapor deposition. She said that despite the high cost of vapor deposition to treat the textiles, it was still more effective than the alternatives. Also, the team explained in their study that the technology -- while initially expensive -- can be scaled up and become more cost-effective.

And that's exactly what the researchers want to do next. Their first big collaboration will be figuring out how to embed health monitoring into the fabrics.

Andrew and the team are currently working with other engineers at UMass Amherst Institute for Applied Life Sciences' Personalized Health Monitoring. The center wants to incorporate their new embroidered arrays with e-textile sensors. These fabrics could help monitor a patient's gait and joint movements during physical therapy and give medical teams a more accurate read as to how a patient is improving.