Max Born and the Formulation of Quantum Mechanics

Without Max Born, many of the technological advances we’ve made in the past century after the discovery of quantum mechanics wouldn’t be possible.

A German physicist and peace advocate, Born laid the quantitative foundation that others would build on to change the way we see and interact with the world today.

As a child, Max Born was kept out of the public schools in Germany due to his apparent physical frailty.

Relying on private tutors, his parents nonetheless provided as strong an education as they could before Born went off to various universities to study mathematics and physics.

Receiving his Doctorate from the University of Göttingen, Germany, in 1907, Born spent the next decade and a half building his reputation as a brilliant physicist.

Born soon began studying Einstein’s Theory of Relativity and eventually corresponded regularly with Einstein himself, which in time developed into a deep and genuine friendship.

Born moved on to Berlin in 1915 to work under Max Planck, but was soon forced into military service in the German Army as the Great War raged across Europe.

This missed opportunity to study with one of the great men of science seemed to have left a profound mark on Born. Without question, the War itself did.

Employed in various radio engineering departments in the Army, he would often pull strings to ensure that former colleagues and students of his would be assigned to his department, sparing them from the horrors of the Western Front.

Once the war ended, Born returned to the University of Göttingen in 1921 as an associate professor of physics. His reputation along with other luminaries lead Göttingen to become the premier center for atomic physics in Europe.

Codifying the Rules of Quantum Mechanics

Like his contemporary, Neils Bohr, Max Born was a very sought after mentor by many who would go on to become luminaries of 20th-century physics.

The collective brilliance of the men and women working at Göttingen contributed greatly to Born’s pioneering work, much of which was built off the discoveries of his protege, Werner Heisenberg.

When Werner Heisenberg wrote his first paper on quantum mechanics in 1925, he showed the manuscript to Born to review.

Heisenberg’s paper described the observable facts about subatomic particles, namely its position, momentum, and its energy, as discrete entities and was one of the landmark scientific papers of the 20th century.

Born immediately saw that these characteristics of a particle could be expressed as mathematical matrices.

Assisted by Heisenberg and Jordan, Born built off Heisenberg’s work and formulated the fundamental description of quantum mechanics, in its matrix form, the first time this had ever been done. 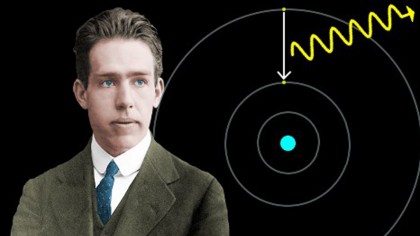 It would soon be shown that the matrix form and the wave form of quantum mechanics were mathematically equivalent, but there was still considerable work to be done to fully express this remarkable system that governed subatomic particles.

Namely, Schrödinger’s Wave Theory incorporated a Wave Function that had not yet been fully explained.

Born, determined to iron out any wrinkles in the new rules he was formulating, went to work exploring the nature of the Wave Function that governed particles in their wave form.

The Wave Function in quantum mechanics

The Wave Function is a relatively simple way of expressing the system of states of subatomic particles. While a particle is unobserved and unmeasured, quantum mechanics says that the particle is in an indeterminate state known as superposition.

This is what gives particles the ability to be in two different places in space at the same time—a serious breach of classical physics which holds that an object can only have one position at a specific point in time.

Once observed, however, a particle must “decide” what it’s actual position is in space.

This process of a particle determining its position is known as the collapse of the wave function.

Every point along the function represents a specific position in space, as determined by the amplitude of the wave at that point on the Wave Function.

What Born realized, and demonstrated in a paper published in 1926, was that these points along the function line, it could be used to calculate the probability of finding the particle at a particular position once the wave function collapses.

By squaring the absolute value of the amplitude of the wave at any given link in the chain, you will get a fraction less than 1, and that fraction, 1/2, 3/4, 1/10^10, etc, represented the probability of the particle being found at that location once it is observed or measured.

With this discovery—which is called the Born Rule—the basic mathematical foundations of quantum mechanics were fully described.

Everything from lasers to MRI machines to quantum computers relies on the work Max Born did in those couple of years in the mid-1920s.

By formulating the actual formulas of quantum mechanics, new tests could be conducted and new research was done to further our understanding of the subatomic world.

A year after his retirement from academia, in 1954, his efforts in 1925-1926 were specifically cited as he was awarded the Nobel Prize in Physics.

Until his death, Max Born would continue to do commendable work after his retirement in pursuit of peace and nuclear disarmament.

In the annals of history, though, Max Born’s work on quantum mechanics was completely transformative and he rightly belongs with the giants in the pantheon of 20th-century physics.