Researchers have put eumelanin through an annealing process that significantly increases its ability to conduct electricity.

The melanin pigment that colors our hair and eyes, called eumelanin, has also long been known to conduct electricity. Up until now, however, the amount has been too little for any useful application.

Now, Italian researchers may have found a way to increase its potential by subtly modifying its structure. They did this by heating eumelanin in a vacuum, a process referred to as annealing.

"This makes possible the long-anticipated design of melanin-based electronics, which can be used for implanted devices due to the pigment's biocompatibility."

What makes eumelanin so exciting is that it is fully biocompatible meaning it could one day be used in cyborg technology.

"Melanins occur naturally in virtually all forms of life. They are non-toxic and do not elicit an immune reaction," explains Pezzella.

"Out in the environment, they are also completely biodegradable."

However, up to now, no one had managed to harness its potential in implantable electronics because its conductivity in both synthetic as well as natural eumelanin had been far too low. To change this, the researchers explored the structure of eumelanin.

"All of the chemical and physical analyses of eumelanin paint the same picture - of electron-sharing molecular sheets, stacked messily together. The answer seemed obvious: neaten the stacks and align the sheets, so they can all share electrons - then the electricity will flow."

The process they employed is called annealing. It consists of heating metal or glass and allowing it to cool slowly, in order to remove internal stresses and toughen it. It is used already to increase electrical conductivity.

"We heated these eumelanin films - no thicker than a bacterium - under vacuum conditions, from 30 min up to 6 hours," describes Tassini. "We call the resulting material High Vacuum Annealed Eumelanin, HVAE." 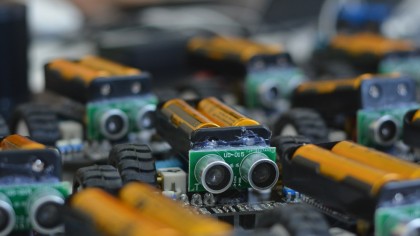 Novel Research Expands the Use of Silicon in Batteries

The process proved successful for eumelanin with researchers reporting the HVAE films became dark brown and about as thick as a virus. Best of all, their conductivity increased to an incredible degree.

"The conductivity of the films increased billion-fold to an unprecedented value of over 300 S/cm, after annealing at 600°C for 2 hours," Pezzella confirms.

This makes eumelanin compatible with a useful range of bioelectronics. And even more importantly, the researchers found the conductivity of HVAE was tunable according to the annealing conditions.

"The conductivity of the films increased with increasing temperature, from 1000-fold at 200°C. This opens the possibility of tailoring eumelanin for a wide range of applications in organic electronics and bioelectronics. It also strongly supports the conclusion from structural analysis that annealing reorganized the films, rather than burning them."

The study is published in the journal Frontiers in Chemistry.

AI Used to Measure Sugar in the Blood

UK Boy First to Receive a Prosthetic Arm Above the Elbow