Mercedes have celebrated the launch of the all-new G-Class by embedding a 1979 model of the iconic car inside a huge block of resin.

Mercedes has cast a 1979 G-Class SUV inside 44.4 tonnes of synthetic resin to show that the car is 'stronger than time'. Taking some cues from the classic film, Jurassic Park, the ‘frozen’ car was on display at the 2018 North American International Auto Show (NAIAS) in Detroit earlier this month.

Mercedes used the resin cast show-stopper to draw crowds to the release of the 2018 G-Class vehicle. The latest version of the iconic Mercedes has much the same styling as its predecessor but with a swag of modern features and technologies.

The resin cast Mercedes-Benz is the largest display of synthetic resin in the world. The car was cast sitting at an adventurous angle inside its amber-colored block to mark the entrance to the Cobo Hall at NAIAS. Mercedes says the stunt was to show that: “Like their genetic material the DNA of the first G-Class has also been preserved and is handed down from generation to generation. These genes are also in the new G-Class and they are carrying through the characteristic properties of the longest-lived model series from Mercedes-Benz into modern times: an iconic design, indestructible superiority off the beaten track and exceptional ride comfort on the road.”

44.4 tonnes of synthetic resin used to encase the vehicle

The square block of amber is 5.50 meters long, 2.55 meters wide and 3.10 meters high. Production of the eye-catching display took 90 days to make from 44.4 tonnes of synthetic resin.

Following its debut in Detriot, the amber block will travel around to another launch event of the 2018 G‑Class. Mercedes took the unusual step of reaching out to its customers to hear their stories about the Mercedes G-Class. A collection of these stories and other titles involving the iconic car can be heard at the Mercedes website. 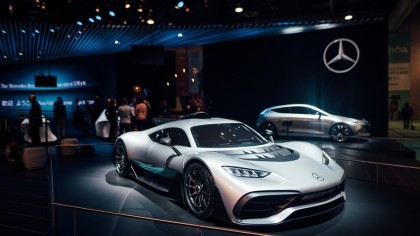 Mercedes-Benz Rolls Out a New Assistant in Infotainment Systems

The all-new Mercedes G-Class, in Mercedes's words, continues its 'success story' with its latest edition. "The new G-Class is setting the bar higher still in all relevant areas – in terms of performance both on and off the road as well as with regard to comfort and telematics. Our 'longest-serving' model series is therefore ideally equipped to continue its success story. In short, the new 'G' is still a 'G', only better", describes Ola Källenius, Member of the Board of Daimler AG responsible for Group Research and Mercedes-Benz Cars Development.

The more technology featured in the recently release car includes LED headlamps, driving assistance systems, high-quality interior with leather seats, and new suspension systems. The 2018 G-Class is priced at around €107,040.50 for European customers. The G-class is an expensive SUV but sits in an unusual position in the market straddling both the luxury car and tough off-road sectors. The car was originally envisioned by Mohammad Reza Pahlavi the Shah of Iran as a military vehicle. Pahlavi was a significant Mercedes shareholder at the time. The car is still used fairly widely by land armies across the world including Australia, Denmark, Greece and North Korea.