Artistic genius emerges when art and technology collide. Franco Recchia, an Italian artist designs amazing model size cities made entirely of recycled computer parts. These models are artistically created using numerous parts found inside any computer or other electronic devices. Next time you switch one of your internal drives you may want to consider turning it into a design of your choice. Your new  metropolis of computer parts may not be able to stack up to Franco's, however it would still be a completely cool way to recycle old electronics.

Franco Recchia has had his art debuted in New York Art Museum, Agora Gallery along with several other elite locations. He is famed for his continual city scenes created from recycled computer parts. Franco's signature style is urban scenes made with circuit boards, computer wiring, computer batteries and basically any electronic component that was at one time connected to the motherboard.

Model cities aren't the only type of urban scene that Franco Recchia creates, he also creates city skylines, city parks and industrial scenes. The one consistent theme is that regardless of what type of design Franco is creating, he will be using recycled computer parts. 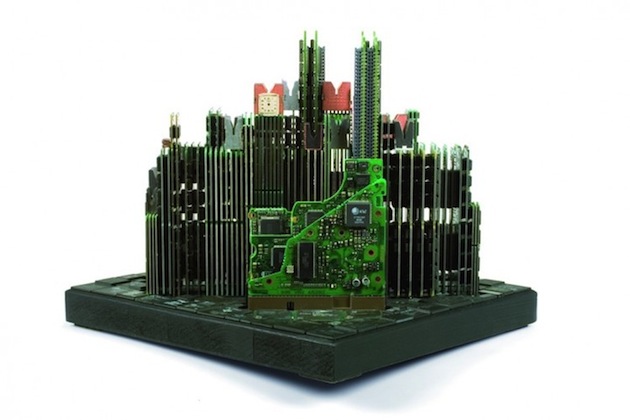 Franco Recchia gained his passion for his unique art style as a young boy growing up. He had always enjoyed taking things apart just to put them back together again. It was later in life when he combined his past time with  art, to make fascinating urban scenes with computer parts.