The Trump border wall might be down to eight finalists, but it doesn't mean the world is moving on from how clever some of the other suggestions were. One that's resurrected in the public eye is a design from architecture firm Estudio 3.14 based in Guadalajara, Mexico.

While other project ideas were clever or eye-catching, the Estudio 3.14 wall is visually arresting. Why? Because the proposed wall would've been nothing but hot pink.

"Because the wall has to be beautiful, it has been inspired in by Luis Barragán's pink walls that are emblematic of Mexico," said the studio. "It also takes advantage of the tradition in architecture of megalomaniac wall building."

Unlike other optimistic (and serious) proposals, the Estudio 3.14 pitch takes into account the wall's actual construction given the existing terrain. Their wall would be 1,954 miles (3,145 kilometers) long, and renderings show just how impractical such a wall would be to keep out everyone from the southern border.

Many architects and environmentalists have spoken out against building the wall along Mexico's "true" border. Estudio 3.14's Norberto Miranda told Business Insider that the wall's construction would be nearly impossible. Given the physical challenges of the terrain, not to mention having to build in an arid environment, the Estudio project would take at least 16 years to build and complete.

(The longest a U.S. president can serve in the office would be 8 years, so the Estudio proposal would take twice as long as Trump could possibly serve -- assuming he gets reelected. And that might be Estudio 3.14's point...)

Not only does the project serve to keep Mexicans wanting to cross the border into the U.S. out, the Estudio 3.14 proposal also includes a massive shopping mall for Americans.

The studio also got serious in its design to reflect the gravity of the situation. Estudio 3.14 tacked on a prison system into the proposal.

"Moreover, the wall is not only a wall," said Estudio 3.14. "It is a prison where 11 million undocumented people will be processed, classified, indoctrinated, and/or deported."

The prison would include various units including security, administration, healthcare and textile factories so that immigrants could finance the wall that would take 16 years to complete.

The Wall and its Progress

As soon as Trump took office in November, it seemed like he wanted to make good on one of his biggest campaign promises -- building the modern-day equivalent of the Great Wall of China while simultaneously making the "bad hombres" pay for the construction. 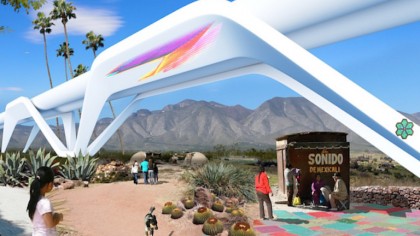 Shortly after being sworn in, Trump issued an executive order for the United States' Homeland Security Secretary "take steps to immediately plan, design and construct a physical wall along the southern border, using appropriate materials and technology to most effectively achieve complete operational control of the southern border."

In addition to the architects who took time out to troll the idea of a border wall with their designs, the US Senate also refused to support a $1.6 billion proposal to test out design feasibility in September.