Michio Kaku's theories about both today's physics world and our Universe's future are fascinating and understandable thanks to the way he skillfully and eloquently expresses himself.

Dr. Michio Kaku was born in San Jose, California on January 24, 1947. He is a theoretical physicist, futurist, and popular science communicator. He is a co-founder of String Field Theory, a branch of String Theory.

"In string theory, all particles are vibrations on a tiny rubber band; physics is the harmonies on the string."

Michio Kaku loved science-fiction shows and books, filled with time-traveling heroes, parallel universes, and intergalactic space travel since an early age. He once said that magic, fantasy, and science-fiction were all a gigantic playground for his imagination, adding that they were responsible for his lifelong love of the impossible.

When he grew older and had to put science-fiction aside, Michio immediately knew the one place he could cling to the impossible was the world of physics.

"Without a solid background in advanced physics, I would be forever speculating about futuristic technologies without understanding whether or not they were possible. I realized to know I needed to immerse myself in advanced mathematics and learn theoretical physics," Michio says. "So that is what I did."

Michio Kaku recalls that when Albert Einstein died on April 18, 1955, his teachers told his class that the great physicist had died before completing his biggest discovery -a theory of everything. Michio was fascinated by this unfinished theory, and he began going to the library to learn more about Einstein and his work.

Despite his family being poor, they wholeheartedly supported Michio’s curiosity. They let him build experiments in the house and took him to local university libraries. Michio was determined to understand what this incomplete theory was all about. 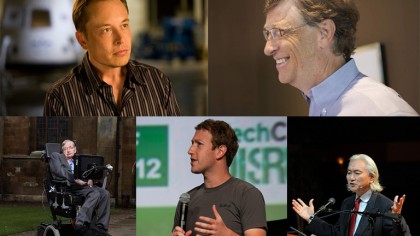 "In string theory, all particles are vibrations on a tiny rubber band; physics is the harmonies on the string; chemistry is the melodies we play on vibrating strings; the universe is a symphony of strings, and the 'Mind of God' is cosmic music resonating in 11-dimensional hyperspace," Kaku says.

Michio Kaku has made many contributions to the field of theoretical physics and String Theory. He is also a passionate science communicator. He has taught at Princeton University and the City College of New York. As a prolific writer, he has written eight books on science for the general public. Michio has also appeared on dozens of radio and television shows in addition to documentaries; in all, explaining complex theories in a way everyone can understand. Michio Kaku is a master in the art of communicating science to the masses.

Albert Einstein tried to find the theory of everything, a theory that could tie together his theory of general relativity and quantum mechanics, which are not fully compatible in the current understanding of physics. Physicists have picked up where Einstein stopped and have come up with String Theory.

String Theory combines Einstein's Theory of General Relativity and his Quantum Mechanics by assuming there are multiple universes and dimensions beyond the ones we know: Multiverses.

Though more evidence and understanding of String Theory perhaps one day we can travel between universes and into new dimensions, potentially even making time travel possible.

Michio Kaku: The Universe in a Nutshell

What if we could find one single equation that explains every force in the universe?

In The Universe in a Nutshell, Dr. Michio Kaku explores how physicists may shrink the science of the Big Bang into an equation as small as Einstein’s e=mc^2.

Advances in String Theory let physics escape the heat death of the universe, explore the multiverse, and unlock the secrets of existence. Michio Kaku picks on our imagination about the future. He also presents a succinct history of physics and makes a compelling case for why physics is the key to pretty much everything. All in all, a fascinating trip to the future of the universe.

Michio Kaku: Kids are born geniuses, but society crushes them

"Einstein once said, 'If a theory cannot be explained to a child, then the theory is probably worthless,'" Michio says. "Meaning that great ideas are pictorial. Great ideas can be explained in the language of pictures. Things that you can see and touch, objects that you can visualize in the mind. That is what science is all about, not memorizing facts and figures," he says.

---- Give the impossible a chance

---- Physics is about curiosity and imagination, not brilliance

Michio Kaku's predictions and statements come from his knowledge as a physicist and his interest in studying what the future might or could bring. In one opportunity, he used the instance of a nearby asteroid to discuss the possibility of asteroids greatly impacting life on Earth in the future. He predicted we may not discover extraterrestrial life when or where we expect to, but it will be essential to keep an open mind.

There is one thing Michio Kaku is sure about: That climate change is a real threat to life on Earth, not just in terms of our future, but also today.

Michio Kaku: The future of humanity

Michio Kaku's book The Future of Humanity travels through the frontiers of astrophysics, artificial intelligence, and technology to set the grounds to his vision on the future of humanity in space, on Mars, and going beyond traveling to distant galaxies. Facing the reality that one day humankind will have to leave planet Earth in order to survive makes it easier to understand what has to be done in order to achieve a gradual adaptation. Dr. Kaku's fascinating journey is based on science, making humanity's survival vision among the stars possible.

5,000 Music-Lovers Attend Pilot Concert in the Name of Science