Placing a microbot into a human body with a battery pack could turn from a useful device into a hazardous situation if the robot were to ever stop working. But what if you could eliminate batteries and motors entirely? In recent years, scientists have been perfecting magnetically controlled microrobots. But controlling multiple robots within the same magnetic field has proven to be quite a difficult challenge. Now, an engineering team recently announced that they created a magnetic device which can operate microbots independently, despite being under the same magnetic field.

In the future, the technology could assist in operations where many microbots are required. Together, they will be able to provide non-invasive therapeutic operations and will allow for more precise local drug delivery systems or medical implants. 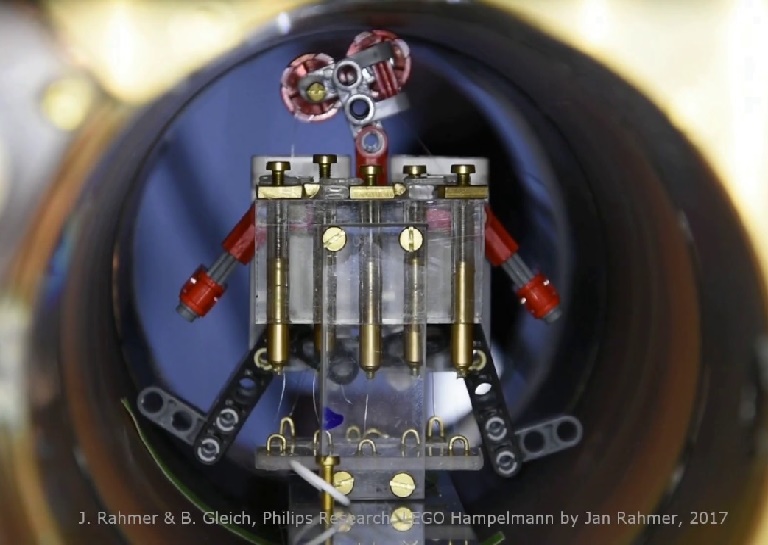 There is an inherent issue with controlling robots with magnets. The magnetic fields which control the robots influence the movements in the same way. Although the swarms look cool when they operate in unison, controlling them independently is a difficult task. Currently, there are a few methods where individual components can be independently controlled close to each other.  But until now, there has not been an efficient method which can selectively operate components which are right beside each other.

Since one of the main uses will be for assistance in medical applications, the robots will have to independently navigate through the small channels and passages inside the human body. For many operations, just one micromachine will not cut it.

The task has been a perplexing one for many years, until now. Researchers recently published a paper describing a new magnetic system which can selectively control identical microbots which are just millimeters apart within the same magnetic field.

Designing a system to overcome the problem

Instead of using tiny robots with self-contained propulsion and navigation systems, the robots rely on a remarkably more elementary solution; a robot which is remotely powered by magnetism. The technology to alter components inside of a magnetic field has been around for a rather long time. Without the need for a direct power system and mechanical controls, the robots can be made much smaller.

In place of a traditional battery and motor, magnetically actuated robots solely rely on magnetism for propulsion and manipulation. The robots can be made from much less hazardous components. Yet at the same time, they can still navigate with as much or more precision than battery powered robots.

Previously, the entire robot was enclosed in a magnetic cloak which alters the position of the robot. However, the issue still remains on how to control the robots individually. Without a physical connection, each microbot receives a similar input and will act in the same way. To combat the issue, researchers Jürgen Rahmer, Christian Stehning, and Bernhard Gleich developed a new magnetic field generator which can selectively operate individual microbots or specific components- even ones within the same field.

There are two ways of going about controlling different microrobots within the same field. One, you could build different sized components which would act differently in a given magnetic field. Of course, larger swarms would be difficult to make and the magnetic input would have to be rather complex. Alternatively, as the researchers' papers describe, there is a technique which uses magnetic fields to selectively interact with specific components.

The technique is truly fascinating. The way the researchers control selective components is not by targeting the objects with a magnetic input. Rather, parts that are meant to move are encircled in a doughnut-shaped magnetic field hole, known as a free field point (FFP). In the center of multiple aligned magnetic coils, the fields meet up and create a very low field gradient. Instead of targeting parts which should move, the magnetic field puts a force on all of the parts which should not move. Anything that is not inside of the FFP is "locked" in place by the higher field gradient. Then, by introducing a gentle rotating magnetic field, things inside (and only inside) the FFP will rotate.

How to spin parts in different directions

To make the screws spin independently, the ones which are intended to move have to be inside of the FFP. Screws that are outside the FFP receive a magnetic force which tilts them sideways, preventing them from rotating, creating the "lock". In the center, the magnetic field does not tilt the screw, leaving it free to rotate in place by another magnetic field. The technology is still quite a way from being able to implement it in a real life situation, but it is an impressive technology. Nevertheless, the scientists were able to individually actuate the screws as close as 3 millimeters apart. Once the technology evolves, it may be able to control components which are even closer. 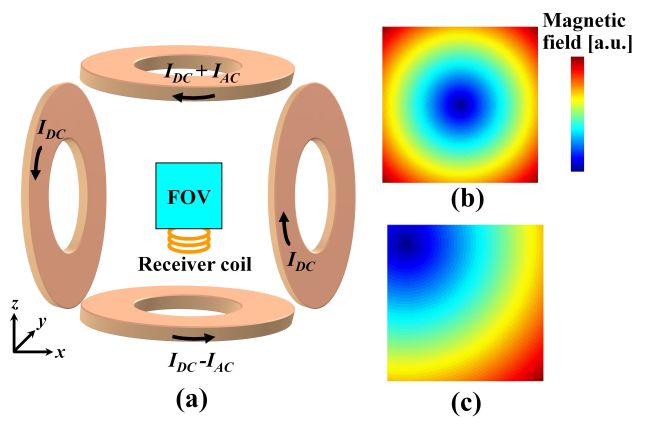 A Maxwell Coil [Left], essentially a set of orthogonal coils (represented by rings) creates the FFP around the microrobots. The device produces a magnetic field [Right] with a magnitude of near zero in the center. [Image Source: Yasutoshi Ishihara, Tsuyoshi Kuwabara and Naoki Wadamori]

Individually actuating specific components is an incredibly useful technology. With it, mechanical pumps can be made which do not bring electricity close to the fluid inside. Instead, an external mechanism could individually operate a system of pumps by choosing which pumps to spin and which ones to "lock". The pumps would also double as a valve, giving the option to divert or stop the flow completely. All in the while, no hazardous components would come into contact with the fluid.

Using the method above, a microbot can be made incredibly small with power packs and motors since their size does not have to be factored as a restriction. Moving forward, the system could potentially control more complex robots which can perform a specific task. The system will be specifically useful in treating tumors. Using the method, robots which enter the body would have switch mechanisms that are independently activated. The robots could carry radioactive medicine or other capsules into the bloodstream. However, the activating device would be placed over only the tumor. Then, once all the other robots are flushed out, only the ones within the devices magnetic field would release the capsules.

The new technology will give future magnetically controlled robots a whole new level of freedom. Soon, smaller and more complex microbots will be able to carry out operations within the body with great precision but without the need for hazardous materials. The technology is a long way off, however, the progress being made every day only makes it a matter of time before magnetically actuated robots reach a level of complexity which will make them applicable in the real world.