Microsoft has announced it has completed the single largest corporate purchase of solar energy ever in the United States.

Microsoft has just announced it is buying 315 megawatts from two new solar projects in Virginia as part of the company's plan to power its global datacenters with renewable energy. The tech giant calls the deal “the single largest corporate purchase of solar energy ever in the United States.”

The move will help Microsoft reach its goal of powering its operations with 60 percent renewables by 2020. “Today, we’re signing the largest corporate solar agreement in the United States, a 315 megawatt project in Virginia that will move us ahead of schedule in creating a cleaner cloud,” said Brad Smith, president of Microsoft.

“This project means more than just gigawatts, because our commitment is broader than transforming our own operations; it’s also about helping others access more renewable energy.” The solar project is owned by sPower, who will also operate the plant once construction is complete.

Once finished the two projects called Pleinmont I and II will consist of more than 750,000 solar panels spread across more than 2,000 acres. The projects will produce approximately 715,000 MWh a year.

“Their early commitment helped ensure that the project continued to move forward and come to fruition at a time of regulatory uncertainty. Microsoft’s large off-take also helped us offer very cost-competitive options for other buyers looking at our Virginia portfolios.

This model broadens the ability for buyers of all sizes to participate in a large project like this, yet only take the megawatts they need for their business goals. We’re proud to be working with Microsoft on this innovative approach.”

The solar purchase means Microsoft achieved its goals to power at least 50 percent of its datacenters with clean energy by 2018. Microsoft has brought its total of directly purchased renewable energy up to roughly 1.2 gigawatts.

Microsoft has ambitious goals for its datacenters to rely on power sourced from wind, solar and hydropower electricity. It aims to use 60 percent renewable energy by 2020.

All of Microsoft's datacenters have been 100 percent carbon neutral since 2012. Microsoft was able to achieve this impressive target by introducing a carbon pricing fee for its clients.

Microsoft charges each business unit a fee based on the carbon emissions of its business operations. This model provides incentives for other businesses to take responsibility for their carbon emissions. 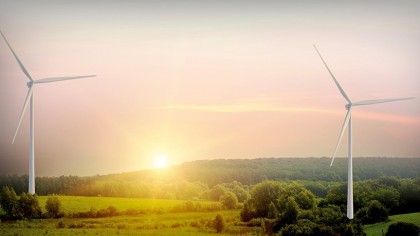 Many companies then find carbon-saving alternatives and invest in carbon-reducing innovations. This program in addition to Microsoft's dedication to the environment in other parts of its business model led it to receive an EPA Climate Leadership Award and to be recognized by the United Nations and World Economic Forum for its carbon fee model.

The company has been ranked by the U.S. Environmental Protection Agency as the second largest user of green power in the United States.