Microsoft will test a data center operating in a container under the North Sea as part of its ongoing goal of environmental sustainability.

Microsoft has opened a data center under the North Sea in its latest venture to be more environmentally sustainable. Project Natick is the name of the test pilot that uses a small data center, packed into a shipping container and dropped to the bottom of the sea.

The data center is located in the North Sea near the UK’s Orkney islands and is fully powered by renewable energy. Microsoft says there are many good reasons for drowning a data center.

First, nearly half the world’s population lives within 150 km (120 miles) of the ocean and that having data centers close to computing hubs means smoother web surfing and less back and forth between users and servers.

Oceans also provide consistent cool temperatures which is essential for a data center to run well, cooling down data centers is what costs its operator (and the environment) heavily, so removing that cost makes sense too. The Project Natick data center consists of 864 servers tightly arranged inside a shipping container that sits 12km off the coast.

This is a really small data center but the number of servers should be enough to provide Microsoft with data to see if scaling up the project makes sense. Microsoft says they will operate Project Natick for a test period of a year.

Initially, the system's batteries will undergo a series of tests and then the system's humidity levels, noise creation and temperatures will also be monitored. If the data center is operating well, Microsoft says it will keep the project open and allow customers to use the facilities.

The project is located on land owned by the Scottish Government off the coast of the Orkney islands. This area generates 100% of their energy from wind, solar, and tidal sources which mean the Microsoft data center is running totally on renewables via an undersea cable. 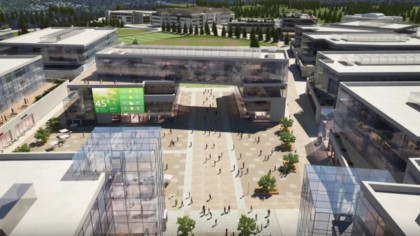 Not only does it not require any additional energy to cool the center, the power it does draw is not contributing to climate change. Currently, Project Natick sits on sea bottom owned by the Scottish government, but the data center is designed so it can be delivered where it’s most wanted.

The Natick Project is just one of a series of efforts by Microsoft to embrace environmental sustainability. In March it announced it would be buying 315 megawatts from two new solar projects in Virginia as part of the companies plan to power its global data centers with renewable energy.

The tech giant called the deal “the single largest corporate purchase of solar energy ever in the United States.” The solar panel investment is one step towards Microsoft reaching its goal of powering its operations with 60 percent renewables by 2020.

Brad Smith, president of Microsoft described the deal saying: “Today, we’re signing the largest corporate solar agreement in the United States, a 315 megawatt project in Virginia that will move us ahead of schedule in creating a cleaner cloud,” said Brad Smith, president, Microsoft. “This project means more than just gigawatts, because our commitment is broader than transforming our own operations; it’s also about helping others access more renewable energy.”