Microsoft is adding 2.5 million square feet to their already massive campus, creating a place for an additional 8000 workers.

Still fresh off of Apple's grandeur "spaceship," Apple Park, Microsoft has announced their big plans to expand its flagship 500-acre campus. Home to their 47,000 employees, the Redmond campus facelift, will be the largest in the company's history and will take five to seven years to complete.

Microsoft will be taking down a total of 12 buildings to make room for 18 new office spaces, creating a place for an additional 8000 workers. The shareholders at Microsoft are ecstatic about the changes. As a new generation of employees joins the rapidly expanding Microsft team, the tech giant aims to create an environment that facilitates the needs of their changing workforce.

In an interview with GeekWire about the project, Microsoft President and Chief Legal Officer Brad Smith stated: “We have the luxury of having 500 acres, and we fully appreciate that it is a luxury that very few companies have, especially when you have 500 acres...". Modern campuses like these have evolved to meet the job market's needs, enabling tech companies like Microsoft to compete for work and talent. By working at a giant like Microsoft, in a very literal sense, you get the "keys to a kingdom."

"The new campus gives us the ability to build a working environment that matches the culture that we’re creating for Microsoft," says Smith. "It’s going to be a working environment that we believe is going to foster creativity and teamwork and informality and the ability of people to connect with and learn from each other and connect with our customers."

Company campuses are becoming more common while growing more colossal: Google, Box, and Groupon to name a few. The aim is always to reflect the hip, modern, and a zen-like company culture that is familiar to many of the more prominent tech companies. These campuses become a sense of pride and bragging rights for the employees that work there. 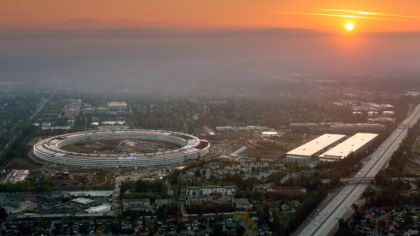 The new campus aims to merge a fluid and sporty environment in its design, adding easier access to public transportation and overall travel-friendly campus. The 18 new buildings will be four-stories totaling around 2.5 million square feet. Outside, the pedestrian design will include various sports fields, underground parking, on top of a massive green outdoor space for events, big meeting, or musical performances.

Since its opening in 1986, the 15 million square feet Redmond campus has been continually evolving to fit the changes in both modern culture and company culture. It should be exciting to see how the campus may change in the next 20 years.