Microsoft Wants You to Stop Using Chrome and Save Battery

Chrome has become a pretty popular browser, but it also is a terrible drain on your laptop's battery. This has been an ongoing issue, and Google has yet to issue a fix. Microsoft has taken advantage of its biggest competitor's downfall and created a video that makes it pretty clear whose browser you need to use if you value your battery. Check out the side by side video below.

Microsoft's Edge browser beats all of the competition, unsurprisingly in a video by Microsoft, by lasting an incredible 7 hours and 22 minutes. Chrome is the first computer to bow out, lasting only a little over 4 hours. This video is proving to be a pretty fantastic advertising avenue for Microsoft, as Edge beat out its closest competition by over an hour, a significant amount of time in laptop battery life.

Even with this battery showdown clearly airing on the side of Edge, the browser still lacks extensions, according to the Verge. These updates will probably come later in the summer, but many still question the success of the browser. 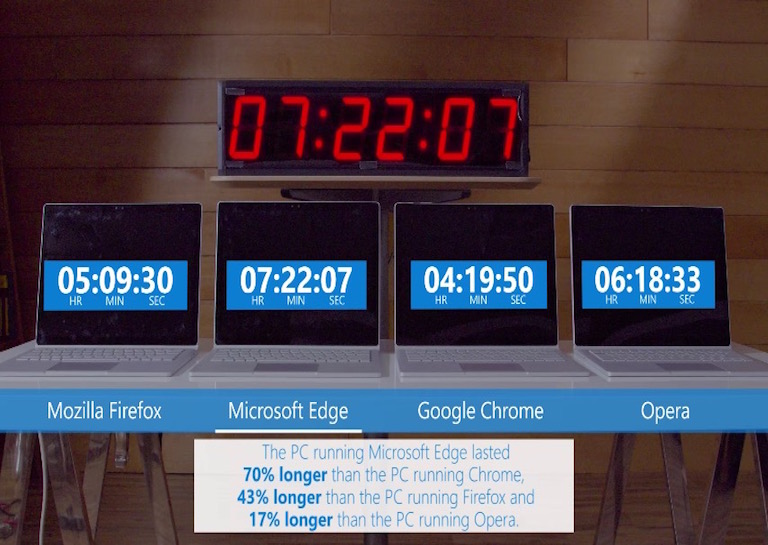 Microsoft has also measured the power draw of the CPU, GPU, and Wi-Fi in all of the tested computers according to Ars Technica, with the results again, in favor of the Edge browser. If you aren't a Chrome or Firefox superfan, then it is probably worth checking out Microsoft Edge, since the battery gains are so great. What do you think, has Microsoft Edge won our browsing?