Maintaining a consistent vacuum is vital in the process of semiconductor manufacturing. Even a tiny minor fluctuation can have a negative effect on the production cycle. Obtaining an effective sealing is a paramount element in achieving consistent vacuum.

Consequently, many semiconductor manufacturers and research labs are under increasing pressure to achieve that kind of consistent vacuum. Facilities are forced to remove greater amounts of gas molecules and particles from their setups due to new technologies and processes which all demand lower pressures.

A new way to measure nearly nothing

The Ntional Institute of Standards and Technology (NIST) designed a prototype that uses ultracold trapped atoms to measure pressure.

The researchers designed a vacuum gauge that is small enough to deploy in vacuum chambers. The vacuum gauge also meets Quantum SI criteria. This means it requires no calibration, depends on fundamental constants of nature, reports the right quantity or none at all, and has specified uncertainties that are suitable for its application.

According to the NIST study, Challenges to Miniaturizing Cold Atom Technology for Deployable Vacuum Metrology published in the IOP Science journal, the development of primary, vacuum metrology based on cold atoms currently falls under the purview of national metrology institutes. According to the researchers, "under the emerging paradigm of the Quantum SI, these technologies become deployable (relatively easy-to-use sensors that integrate with other vacuum chambers), providing a primary realization of the pascal in the UHV and XHV for the end-user." 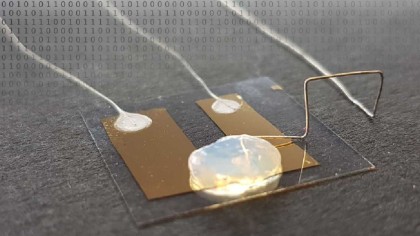 IT Energy Efficiency: Single-Atom Transistor in Gel Electrolyte Reaches the Limit of Miniaturization

The new gauge design tracks changes in the number of cold lithium atoms trapped by a laser and magnetic fields within the vacuum. The result is that trapped atoms fluoresce due to the laser light.

"Nobody has thought about how to miniaturize such cold-atom vacuum gauge and what kinds of uncertainties it would entail," Stephen Eckel, one of the researchers said. The scientists are in the process of developing such as system that could potentially replace sensors which are now in the market.

According to the study, the new design uses a newly developed variation on a staple technology of atomic physics: The magneto-optical trap (MOT), in which there are six laser beams, two opposing beams on each of three axes.

The use of lithium is another innovation in the design. "Nobody to our knowledge has been thinking about a single-beam MOT for lithium," says Daniel Barker, another of the researchers. "Lots of people think about rubidium and cesium, but not too many about lithium. Yet, it turns out that lithium is a much better sensor for vacuum," Barker says.

Lithium is the third lightest element. It belongs to the group of alkali metals which include sodium, potassium, rubidium, and cesium, which are easy to cool and trap.

According to James Fedchak, who oversees the project, UHV and XHV environments are a critical part of the infrastructure in advanced manufacturing and research, from gravitational-wave detectors to Quantum information science.

The new cold-atom vacuum standard (CAVS) device "will enable manufacturers and researchers to accurately determine the vacuum level before the experiment or process begins," Fedchak says. "It will also allow lower levels of vacuum to be accurately measured." These levels are becoming increasingly important in areas such as quantum information science.