With an ever increasing world population and cities becoming denser people often find themselves living in small and cramped city apartments. It's at times like these when people wish that Dr. Who's Tardis was a reality - small on the outside but huge on the inside. Well, you may be happy to hear that MIT Media Lab's Changing Places research group is currently on the case and although a Tardis is not likely in the near future, they've come up with a solution to make your small room into a large interactive living space. 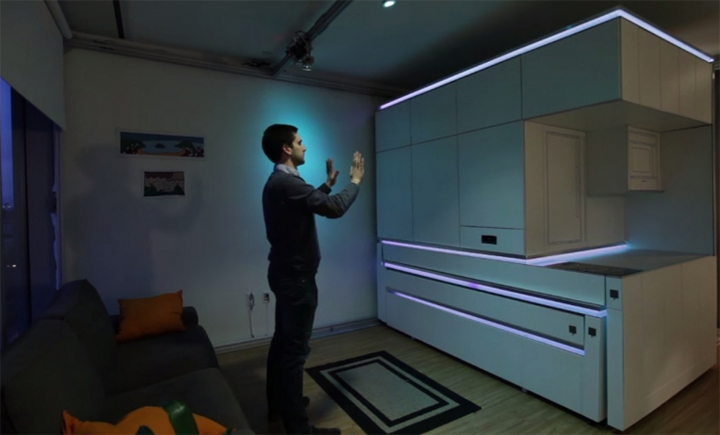 They've been working on a project called CityHome and have just revealed the RoboWall, a fully interactive and robotic housing for all the apartments furniture that MIT says can make your 200-square-foot apartment feel three times as big. The armoire can reveal the required furniture using gesture, voice and touch control and can also move itself as an entirety a few feet either way. The block itself comes in at 182-square-foot which might leave you wondering how it could possibly make a 200-square-foot room feel bigger?

The idea is to cram in every aspect of an apartment into one block. This includes the bedroom, office space, dining room fit for 14 and also a kitchen; so with the flick of a wrist, the internal motors can reveal a bed, office desk or kitchen top at will. The RoboWall also houses a stove-top, a closet, and additional storage space.

Furthermore, when the block moves on its own axis, it can double the size of a bathroom or kitchen when need be. Once you're done using the furniture, a simple gesture control can stow it all back up and move the block itself to expand the space you want to use.

[Image Source: MIT]
It's also rammed with technology. Hue lighting adds to the futuristic feeling and apps can also be installed to control the apartments heating system and lighting. The internal furniture is also fully customisable and the RoboWall can be adapted for each apartment and personal requirements.

“This would work well in the 30 to 40 Innovation Cities where young people are priced out of the market,” lead researcher Kent Larson explains. “At $1,000 per square foot in Boston, the extra cost of technology is trivial compared to space saved for a furnished apartment.” The idea is simple, get a small apartment that meets your budget and make it feel like it's bigger.

Larson also knocked off any doubts that this would just be a concept and is claiming that it is a viable product which he is looking to fund using either a startup or commercial sponsor.