MIT created a battery from a genetically engineered virus to pick up carbon nanotubes to create and grow the components required to make a battery.

Engineers at MIT discovered genetically altering a viruses enables it to collect the materials required to make the positive and negative ends of a lithium-ion battery. The new batteries' characteristics almost exact the performance of state of the art rechargeable batteries currently being used in hybrid cars and personal electronic devices.

The production of the batteries can also be manufactured cheaply without an environmentally damaging process. The synthesis of the battery "takes place at and below room temperature and requires no harmful organic solvents, and the materials that go into the battery are non-toxic", reports MIT.

Traditionally, lithium-ion battery utilizes lithium ions which flow between a negatively charged graphite anode and a positively charged cathode generally comprised of cobalt oxide or lithium iron phosphate. However, a team at MIT discovered a method to genetically alter viruses 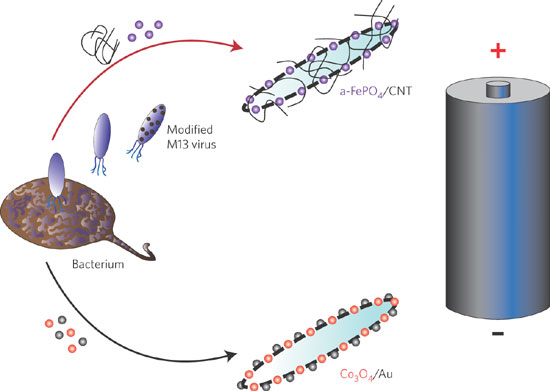 According to MIT the battery is achieved by

The bacteria selected is a bacteriophage, meaning it can only infect bacteria while remaining harmless to humans.

After the initial experiments of creating a viable but poorly performing battery, the team decided to introduce the carbon nano tubes in an effort to increase the cathode's conductivity without much addition of external weight. With the new modification, the viruses were able to self-assemble a nanowire after becoming an anode by collecting cobalt oxide and gold on themselves, further improving the performance of the originally virus-oriented battery. The new batteries created demonstrated some extraordinary characteristics as the batteries maintained a high energy density (~200 W h kg−1) and high specific power (~4.5 kW kg−1). Pending on improving the charging cycle degradation, it could be a viable candidate to be used within electric cars and other electronic devices. However, while the batteries were able to achieve 100 charging cycles without losing much capacity, after the initial 100 cycles, the performance begins to degrade far quicker than current lithium-ion batteries.

Unfazed from the minor setback, the team decided to push forward with further experimentation. After the initial  success of demonstrating the feasibility of creating a battery from a virus, perhaps a few more modifications could see the battery become more reliable and resilient to degradation making it an economically and environmentally friendly alternative to other methods of battery production. The new batteries could become the future power stores for electric cars and electronic devices.