Advances in the efficiency and energy production of solar panels are needed to increase the devices as viable alternative energy sources. A team of engineers at MIT may have just made that breakthrough, creating solar panel towers that can increase energy output by more than 20 times! The out-of-the-box solution was to focus not on making the cells more efficient but rather perfecting the arrangement of the solar panels. Of the different environments the cells were tested under, they performed best in places far from the equator and on cloudy days as compared to traditional solar panels. This new concept was just published in a paper in the journal Energy and Environmental Science.

“I think this concept could become an important part of the future of photovoltaics” ~ Jeffrey Grossman, Senior Author

In true engineering spirit, the team first built a computer algorithm to analyze the best layout of solars cells to maximize output in various environments. Not only does the new layout increase output, but it makes the cells less susceptible to changes in cloud cover and seasons meaning a more uniform energy production rate. There is one down side however, due to their obvious increased structural design needed to implement the panels, they cost much more than a tradition Photovoltaic (PV) setup. This increased cost is far outweighed by the additional more steady energy production, so the design still has potential.

SEE ALSO: Airport in India is the first in the world to run 100% on solar energy 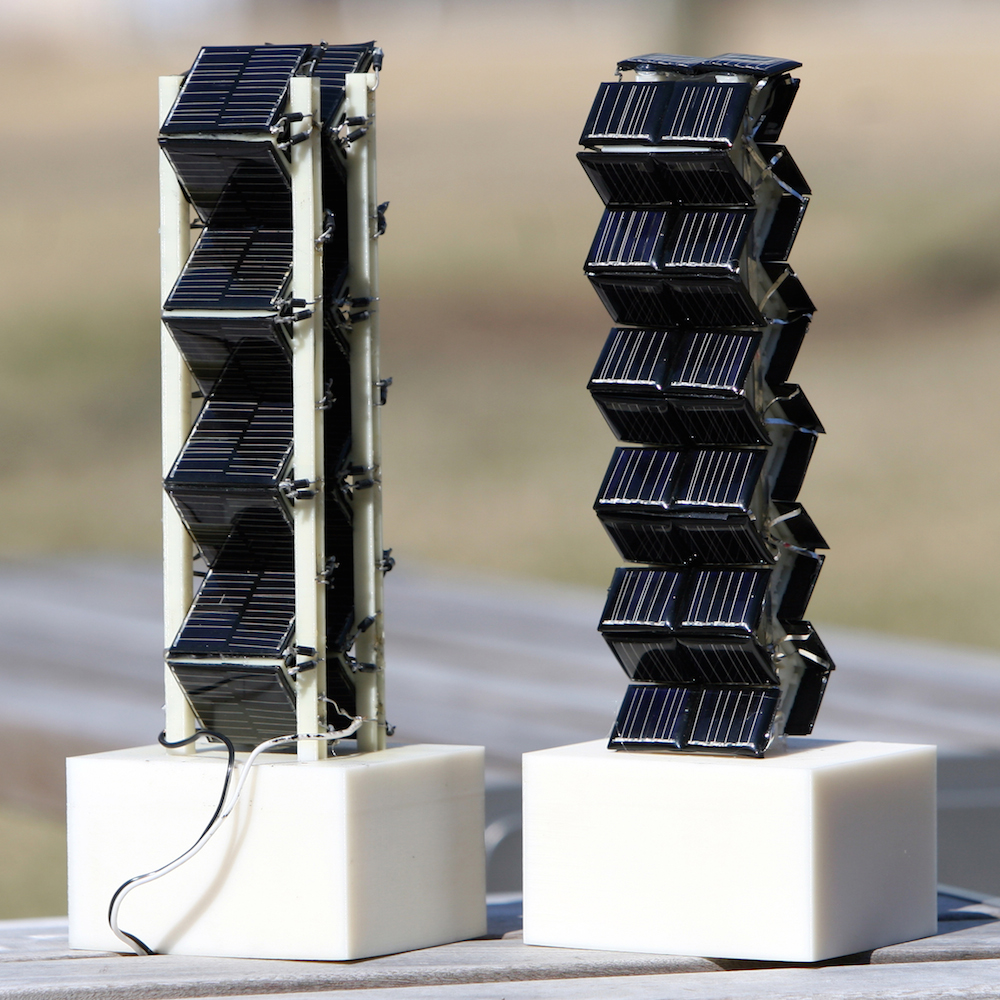 As each cell is not simply angled in one direction, the towers can collect energy uniformly at all times of the day so there is the same amount of energy produced in the morning as high noon.

“The cost for silicon cells is a fraction of the total cost, a trend that will continue downward in the near future.” ~ Grossman

The time is right for this innovation as the cost of solar cells continue to drop with the advances in efficiency and production. Solar cells will eventually become cheap enough that when coupled with this vertical layout, energy production can be maximized and sustained. The tower structure that proved most efficient was designed to be able to be closed and shipped flat then quickly assembled onsite. Portability of large scale PV cells would allow for larger gatherings and even industrial work to be sustained further from access to the power grid.

Solar energy has a bright future across the world and with continued advancements in efficiencies and layout structure can become a sustainable energy source.

SEE ALSO: What is the future potential for solar?