The innovation described as a high-tech version of a parasol could provide cooling of as much as 20 degrees Celsius (36 degrees Fahrenheit) in off-grid locations.

MIT researchers have conceived of a novel cooling system that is both made of inexpensive materials and requires no fossil fuel-generated that actually works effectively. The key innovation could soon provide much-needed cheap and reliable cooling in off-grid locations as well as other useful real-world applications.

The invention essentially works like a high-tech version of a parasol by allowing emission of heat at mid-infrared range of light. These wavelengths of light can pass straight out through the atmosphere and radiate into the cold of outer space punching through the greenhouse gases. 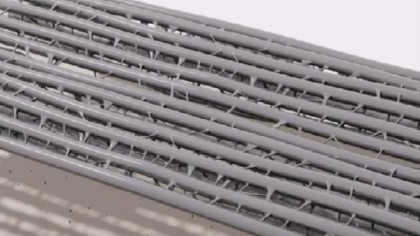 And its effects are no joke! In an initial proof-of-concept testing, the device has already achieved a cooling of 6 C (about 11 F) below the ambient temperature. But the scientists estimate that it could be increased to of as much as 20 degrees Celsius (36 degrees Fahrenheit).

This is not the first time scientists have attempted to design passive cooling systems that radiate heat in the form of mid-infrared wavelengths of light. But past systems have been based on complex engineered photonic devices, making them both expensive and difficult to mass produce.

However, MIT's team conceived of an idea to shade the device by essentially putting an umbrella over it while also supplementing it with insulation to protect from the ambient air temperature. It was this breakthrough that made passive cooling more viable in the system.

“We built the setup and did outdoors experiments on an MIT rooftop,” said device co-creator Bikram Bhatia. “It was done using very simple materials” and clearly showed the effectiveness of the system.

Perhaps what is most impressive about the device is its simplicity. “It’s kind of deceptively simple,” said collaborator and professor of mechanical engineering and department head Evelyn Wang.

“By having a separate shade and an emitter to the atmosphere — two separate components that can be relatively low-cost — the system doesn’t require a special ability to emit and absorb selectively. We’re using angular selectivity to allow blocking the direct sun, as we continue to emit the heat-carrying wavelengths to the sky," Wang said.

This approach makes the system ideal for more localized applications. “This would be useful for refrigeration applications, such as food storage or vaccines," explained Wang.

Even if it was not powerful enough to bring down the temperature all the way to needed levels, “it could at least reduce the loads” on the electrical refrigeration systems, said the researcher. It could also be useful in certain concentrated photovoltaic systems for preventing overheating.

The team is now working on improving the insulation of the device to achieve the perfect balance of preventing it from heating up too much from the surrounding air, while not blocking its ability to radiate heat. The team has already applied for patents on the invention.

The new system is described this week in the journal Nature Communications.