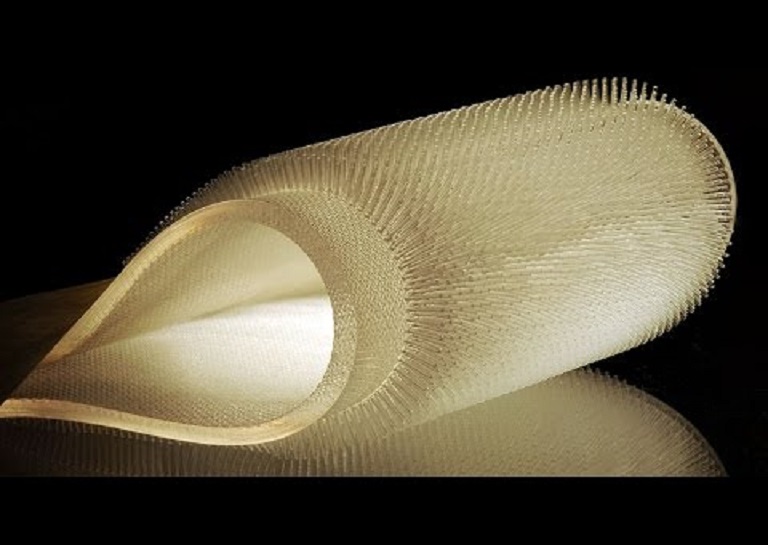 MIT researchers looked at beavers to investigate how the small creatures stay warm in the icy-cold water. Now, they're applying the beaver's protection to develop a furry wetsuit to keep surfers warm.

Beavers most commonly live in Northern areas which experience incredibly cold winter temperatures. While many arctic creatures use flubber to insulate from the cold, beavers must use alternate measures in order to stay nimble and alive.

Beavers may not have much fat, but they have another important adaptation. The small mammals grow two types of specialized hairs which cover the entirety of their body. The outermost layer consists of coarse guard hair which is particularly effective at repelling water. The long stiff strands are coated with a water-repellent oil secreted from the beavers oil glands. The oil works to waterproof the hair by actively repelling water

Underneath the guard hair is the underfur. The underfur's short, densely packed fur traps warm air as the beaver plunges into frigid water. The fur components keep water out and retain air as an incredibly effective insulator. Beavers may lack thick insulating blubber, however, by trapping pockets of air, beavers can remain underwater for  upwards of 15 minutes.

The Beaver's waterproofing capabilities intrigued MIT researchers and engineers, leading them to try and replicate the effects in a synthetic material. The material has multiple potentials, including use in a lightweight wetsuit.

Surfers cyclically enter and exit the water, similar to how semi-aquatic animals, such as the beaver, are consistently in and out of their watery homes.

“We are particularly interested in wetsuits for surfing, where the athlete moves frequently between air and water environments,” says Anette (Peko) Hosoi, a professor of mechanical engineering and associate head of the department at MIT.

The team, lead by Hosoi, investigated the fur to develop multiple prototypes with different characteristics.

“We can control the length, spacing, and arrangement of hairs, which allows us to design textures to match certain dive speeds and maximize the wetsuit's dry region,” Hosoi continues.

How They Built a Beaver Suit

The team fabricated several acrylic molds which had thousands of tiny laser-cut holes spaced throughout the block. The researchers investigated multiple molds with varying lengths and densities. Then, they filled the molds with a soft casting rubber known as PDMS (polydimethylsiloxane). When cured, the hairs were extracted.

One by one, the researchers plunged the synthetic furs into water. The tested varying speeds, depths, and angles to determine the optimal configuration. A camera captured how much air was retained during the dive. The research revealed more densely packed hairs retained more air for plunges which were executed at higher speeds.

"Basically we found that the weight of the water is pushing air in, but the viscosity of the liquid is resisting flow (through the tubes),” Hosoi explains. “The water sticks to these hairs, which prevents water from penetrating all the way to their base.”

Using a mathematical equation, Hosoi and Nasto developed a refined material to optimize the waterproofing capabilities. The equation precisely predicted the characteristics of how much air can be retained, a first for science.

"People have known that these animals use their fur to trap air,” Hosoi says. “But, given a piece of fur, they couldn’t have answered the question: Is this going to trap air or not? We have now quantified the design space and can say, ‘If you have this kind of hair density and length and are diving at these speeds, these designs will trap air, and these will not.’ Which is the information you need if you’re going to design a wetsuit. Of course, you could make a very hairy wetsuit that looks like Cookie Monster and it would probably trap air, but that's probably not the best way to go about it.”

Conventional suits are made from a thick layer of insulating neoprene rubber. The suits retain heat well, however, they are heavy and can feel restricting to wear. The synthetic fur enables the insulating layer to contain much less material with an even thinner substrate which will leave the suit to be more flexible.

Currently, the repellent fur can keep out the water for a short amount of time. Long exposures to water or large pressures penetrate the fur. Long exposure ruins its insulating characteristics. However, in cases like surfers, the suit is only briefly in the water and minimal depths, making it an optimal solution to conventional wetsuits.

An Advertising Company Wants to Make Deepfake Clones of Your Face