The unique material successfully repels 70 percent of the sun's heat away from windows, potentially saving businesses from further cranking up the A/C.

While the northern hemisphere slips into winter, the southern hemisphere is bracing for warmer summer temperatures. With the summer months on either hemisphere, buildings often crank up the air conditioning to battle the heat.

However, this often sends energy bills soaring. In the United States alone, office buildings spend up to $29 billion in keeping temps down -- even if energy bills climb. Air conditioners even use up to 6 percent of total electrical expenditure in the US, according to statistics.

A new solution from the Massachusetts Institute of Technology could save businesses hundreds of thousands of dollars in energy to cool their buildings. A new heat-rejecting film can be applied to windows and successfully reject up to 70 percent of the sun's heat.

The window treatment remains transparent below 89 degrees Fahrenheit (32 degrees Celsius), according to the researchers. With this system, the MIT team estimates companies could save an average of 10 percent in energy costs.

Professor of mechanical engineering Nicholas Fang said the treatments let buildings passively cool themselves while still letting in enough light. He also said it's a cost-savvy option to expensive window treatments or blinds.

"Smart windows on the market currently are either not very efficient in rejecting heat from the sun, or, like some electrochromic windows, they may need more power to drive them, so you would be paying to basically turn windows opaque," Fang said. "We thought there might be room for new optical materials and coatings, to provide better smart window options."

Fang started working on this idea while collaborating with a team from the University of Hong Kong. They wanted to reduce their energy usage during the muggy summer months.

"Meeting this challenge is critical for a metropolitan area like Hong Kong, where they are under a strict deadline for energy savings," explained Fang.

Hong Kong currently has a commitment to reduce its energy use by 40 percent by the year 2025.

Fang's MIT students noted a massive problem stemmed from windows and how they retain sunlight.

"It turns out that for every square meter, about 500 watts of energy in the form of heat are brought in by sunlight through a window," Fang noted. "That's equivalent to about five light bulbs."

Fang's researchers specialized in how phase-changing materials scatter light. They wanted to apply that materials research to finding a new window solution, especially if it could reflect that sunlight away and divert heat.

"[The material is] like a fishnet in water," Fang said. "Each of those fibers making the net, by themselves, reflects a certain amount of light. But because there's a lot of water embedded in the fishnet, each fiber is harder to see. But once you squeeze the water out, the fibers become visible."

The researchers applied two sheets of their final product to a 12-inch by 12-inch glass for a window. They then shone a light to simulate the sun through the window. The window 'frosted' in response to the heat.

Even with the visual change, the researchers discovered the film rejected 70 percent of the heat coming from the lamp. 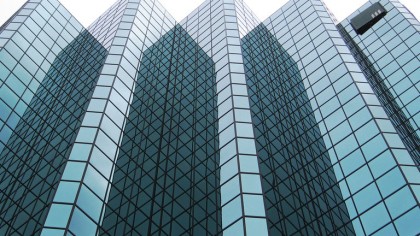 "That's a big difference," Fang said. "You could make a big distinction in comfort."

The MIT team wants to keep looking into the window solution and apply it to other surfaces for more energy-saving opportunities. However, windows are a great place to start.

“Windows have been one major bottleneck of building efficiency,” said Xiaobo Yin, an associate professor of mechanical engineering at the University of Colorado at Boulder who wasn't associated with the project. “Smart windows that regulate solar energy intake can potentially be a game changer. One great advantage of this work is the materials used, which substantially improve applicability and manufacturability of smart windows.”

Here's How White Noise Could Save Millions of Birds