Just like an hourglass, engineers at MIT have designed a new liquid battery that operates through gravity to keep energy flow moving. The new approach to liquid batteries offers up the technology on a rotating platform that allows for the transfer of fluids between positive and negative electrodes. Liquid flow batteries are not a new concept, using different chemicals to store positive and negative charges, but a gravity designed system is, according to Gizmodo. Previous liquid battery designs have required complex pumps and valves whereas this system simplifies the process. 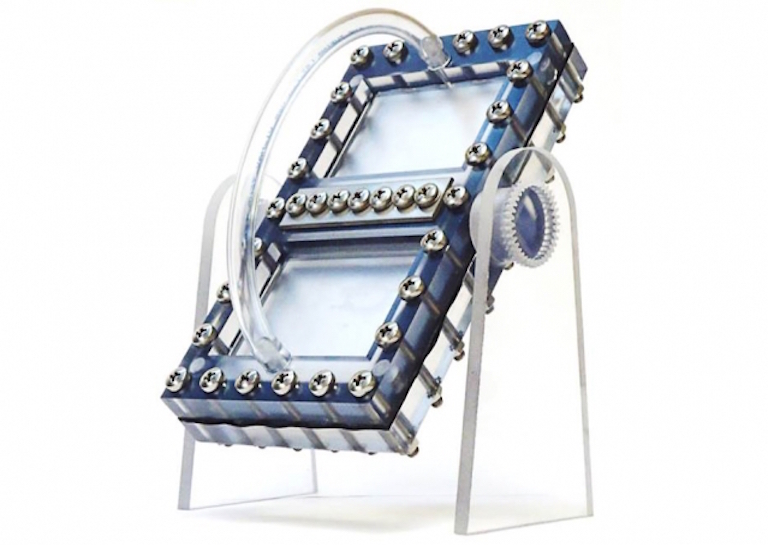 The device uses gravity as the pumping mechanism. As the chemical slurries are mixed, electrical current is generated. If more energy production is needed, then the angle of the membranes can be adjusted to create higher flow rates, according to MIT. The research team has published a paper on the new device here, stating that they believe their design is more like a 'concept car' than anything else. Their design will be a proof of concept that gravity can be used as an effective pumping technique in liquid batteries, but will likely never see mass production.

This 'hourglass' liquid battery design has a redox active fluid on one side and a solid lithium sheet on the other. Such a setup allows for the necessary proof of concept, but the team is looking to create a liquid cell on both sides to allow the device to work in both directions. If you need some background into how exactly a liquid battery works, Stanford has a short video explaining the process below.

One of the foreseen applications of these simplified liquid batteries would be larger energy storage capacity within a smaller overall footprint. Since liquid batteries only require 2 tanks, or cells, then the interaction point where voltage and current are drawn can be small. This simplifies the components, and researchers believe that future batteries could be 3D printed and assembled very quickly.