Drones that can fly AND drive have the potential to change the way we think about automotive design.

These groundbreaking robots that both fly and maneuver terrain are being developed by MIT’s Computer Science and Artificial Intelligence Laboratory (CSAIL). The researchers turned to nature for inspiration, where it is common to be able to walk and fly. Birds and insects, for example, have mastered the dual methods of transportation. Developing robots with similar abilities would open up huge new for robotics applications. For instance being able to explore territories that aren’t accessible solely via land or air, but could be mapped or investigated using a combination of both.

Drones that can drive

The challenge lies in the way we currently design robots. Most often we lean towards making them very very good at a particular task to the detriment of other skills. A regular drone can fly but once those feet are on the ground it becomes rather useless. The team at CSAIL is attempting to get over this hurdle. In a recently published paper, they present research on eight quadcopter drones they have developed that can fly as well as drive. PhD student Brandon Araki explains: “The ability to both fly and drive is useful in environments with a lot of barriers, since you can fly over ground obstacles and drive under overhead obstacles.” 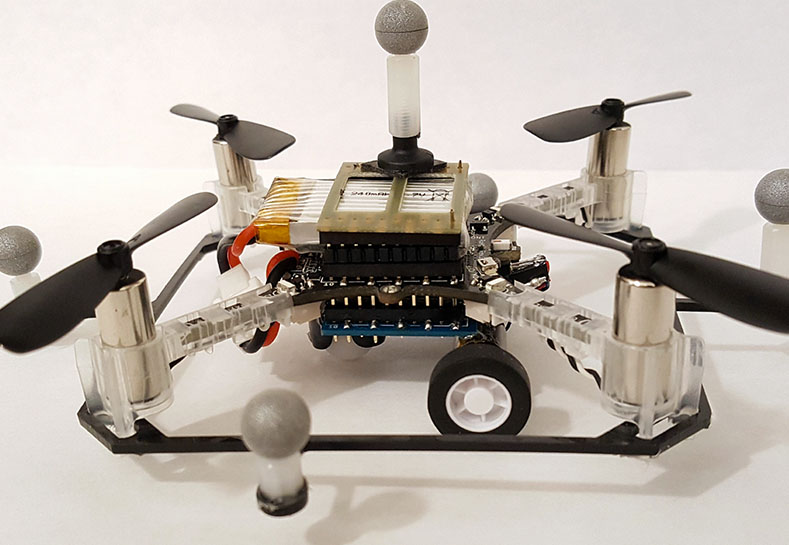 CSAIL Director Daniela Rus is working with Araki to develop the drone system in conjunction with MIT undergraduate students and ETH Zurich’s Advanced Interactive Technologies Lab. The collaborative team showed off their most recent research and drone squad at the recent IEEE’s International Conference on Robotics and Automation (ICRA) in Singapore.

The current project is a development of Araki’s previous research when he worked developing a “flying monkey” robot.

The monkey-robot could crawl, grasp and fly. While the bot was seriously agile, it had no autonomous travel ability. The new system of agile drones is equipped with two small motors with wheels at the bottom of each one. This allows the drone to drive approximately 252 meters or fly for 90 metres before exhausting its batteries. An integral part of the design are “path-planning” algorithms in the drones that ensure they don’t collide with others in their ‘swarm’.

Researchers tested the team of eight in a pseudo city environment created from different textured materials and cardboard boxes acting as buildings.  The drones were able to complete a course through the lab environment without any crashes.

Director Rus points out rather than add wings to cars, their approach encourages scientists to think about what we already know about autonomous safe driving and apply that knowledge to drones. She adds, “As we begin to develop planning and control algorithms for flying cars, we are encouraged by the possibility of creating robots with these capabilities at small scale. While there are obviously still big challenges to scaling up to vehicles that could actually transport humans, we are inspired by the potential of a future in which flying cars could offer us fast, traffic-free transportation.”