A team of researchers at MIT have devised a miniaturized system for targeting specific areas of the brain affected by various neurological disorders.

When it comes to surgical procedures and medical treatment, the brain is without a doubt the most delicate, unpredictable organ in the human body. For this reason, the field of nanotechnology—which involves the use of tiny structures ranging from sizes between 1 to 100 nanometers to deliver microscopic injections—is gaining wider focus for research and development.

Though not quite as small, a team of researchers has developed a miniaturized system that functions as a medicine transmission system, the target being the brain: the destination could be as small as 1 cubic millimeter. And in the case of nanotechnology as well, the ultimate objective is to reach areas of the brain that drugs or standard surgical tools cannot.

The apparatus consists of a set of small cannulas—medicine-delivering tubes—that are encased inside of a stainless steel needle with the thickness of strand of human hair: each cannula has a 30 micrometer diameter, and measures 10 centimeters long, while the needle itself measures about 150 microns across. Thanks to these needles, medicine goes to deep recesses of the brain, targeting specific areas.

Details about the results and the design of the experiments appear in the article, titled “Miniaturized neural system for chronic, local intracerebral drug delivery” in last week’s issue of the Science Transitional Medicine journal. They refer to the it as MiND(S) (as far as puns go, the team definitely scored a win with this name), which stands for miniaturized neural drug delivery system. They connected the cannulas to small pumps would be implanted underneath the skin for treatment.

Experiments done on lab rats were promising in two areas:

• The team could see a significant effect on the animals’ motor skills.

• Through the use of the drug muscimol to simulate the effects of Parkinson’s disease, they were then able to halt the effect of the disease on their motor skills through a separate injection.

The team has carried out experiments with non-human primates as well, and the potential for use in humans is enormous:

“The whole idea here is that instead of treating the entire brain, you can treat small portions of the brain,” MIT engineering professor Michael Cima and study co-author said. “Right now we treat them with drugs that go everywhere in the brain, and those have serious side effects.” 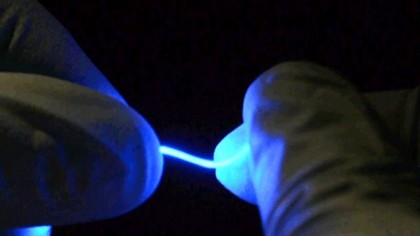 In other words, the device would act as a kind of tiny, microscopic IV medicine drip,  via the little needle and pumps (refilled via a silicone septum) that would be implanted in the brain, just under the skin via a small incision. Cima adds that the procedure would essentially be “like getting a shot.” The procedure’s most effective use in humans would be to counteract the side effects of drugs on the market used to treat various brain disorders, such as depression or Parkinson’s disease.

“We believe this tiny microfabricated device could have a tremendous impact in understanding brain diseases, as well as providing new ways of delivering biopharmaceuticals and performing biosensing in the brain,” says Robert Langer, the David H. Koch Institute Professor at MIT and one of the paper’s senior authors.